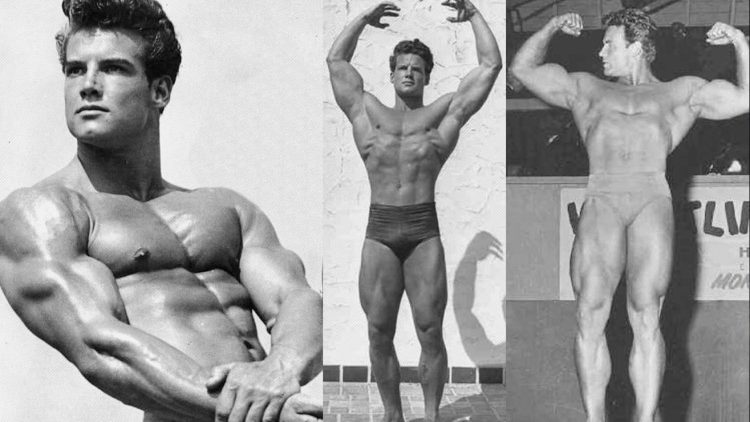 Let’s examine an early Steve Reeves workout. It’s the one which gave him the greatest gains in muscle mass. The beauty of the routine is that it’s simple and built around basic exercises. Nothing fancy…just a solid strength building routine that built the foundation of a Mr. America physique!

Steve really packed on the muscle using this simple bodybuilding routine. He went from a lean but skinny 6’1″ and 163lbs to a muscular 193lbs in just four months! 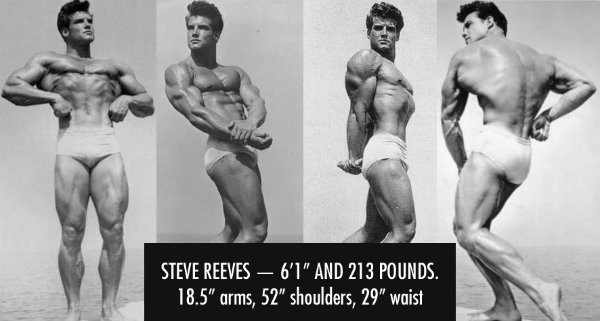 As you can see, this is a full body routine. It is built around basic mass building exercises. Most beginning bodybuilders would benefit from such a simple full body workout. It’s easy to forget this reading current bodybuilding magazines.

Remember, however, that Steve had amazing genetics. He was also 16-17 years old with his natural hormones surging like mad. Do not expect to gain 30lbs of muscle in 4 months as he did. Very few will come close to those results. You should expect good progress though. Your results will ultimately depend on your own genetic potential.

Tips and Suggestions from Steve

The first exercise listed, “Dumbbell Swings” are a warm up exercise. Grab a light dumbbell with both hands. Stand with a little wider than shoulder width stance. Squat down a bit as you let the weight swing down between your legs with your arms extended. Then stand up as you raise the weight above your head. Repeat for 20 reps or until you feel warmed up. This was one of Steve’s favorite ways to warm up. The point is to warm up one way or another. Whatever works for you. 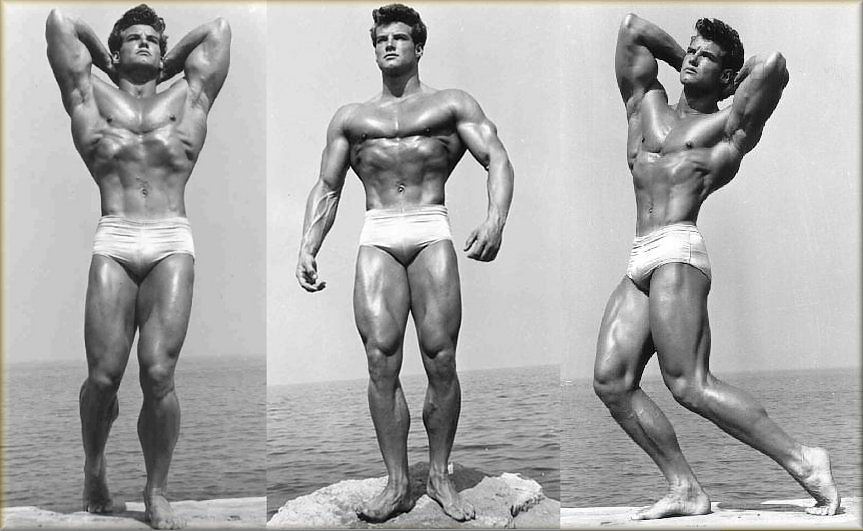 Steve advised slow controlled reps. Perform each set until you can no longer complete a rep with perfect form. No swinging, jerking, or leaning to finish extra reps.

Always train with progressive resistance in mind. Start with a weight that allows 8-10 reps in perfect form. When you are able to do 12 or more reps with the same form, add more weight. Keep repeating this process and muscle gains are sure to follow. Don’t let your form degrade to get extra reps. You’ll only be cheating yourself out of gains in the long run.

Train “down the rack” so to speak. Start with your highest weight and reduce the weight with each set after. If you are training until positive failure you will have no choice but to reduce the weights.

Steve believed in training his smaller muscles first and the larger muscles of the legs later in a workout. Do the exercises in the order listed.

The Steve Reeves workout was performed 3 days per week. Typically he trained Monday, Wednesday, and Friday for example.

Tips for the average lifter

Keep in mind Steve’s genetics and age when performing this workout. If you aren’t as genetically gifted or are an older lifter, then be careful. Doing Steve Reeves workout exactly as he did may lead to over training and little to no results for you. There are things you can do to adjust his workout to your needs.

You might consider not go to failure on the first set or two. Use them as further warm ups. Another option is to eliminate one set of each exercise listed only doing 1 or 2 sets total.

Still another option for the less genetically gifted is to add extra rest days. Train every 3 days instead of 3 days per week. This will allow for more recovery and growth. Workouts won’t fall into a consistent weekly schedule, however, so you’ll have to be creative with your planning.

Steve himself may have benefited from lowering his overall volume of training. You see, after his initial gain of 30lbs in 4 months, it took another whole year for him to add ten more pounds. It is possible that the quick gains could have continued had he adjusted the volume down after those first four months.

As Steve grew bigger and stronger, the weights he was using grew heavier and heavier. This added to the stress on his body that each workout produced. The demand on his recovery ability was eventually too much and the quick gains slowed. Food for thought.

Steve Reeves workout may not be for everyone but it does show how basic bodybuilding routines are needed for a good foundation. Steve made remarkable progress on a no nonsense full body routine and so can you.