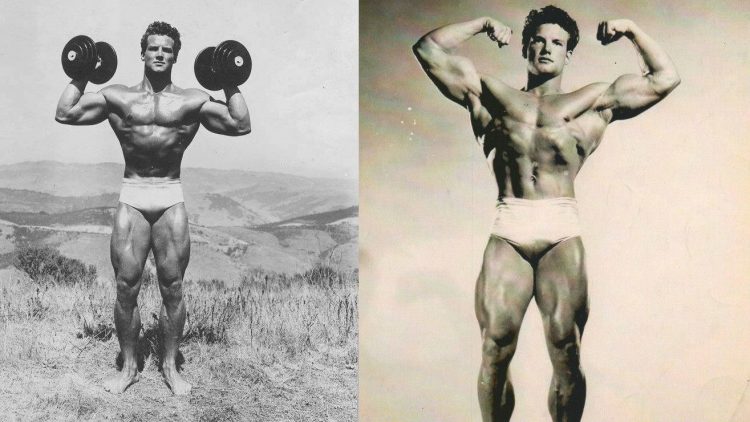 Stephen L. Reeves was born in Glasgow, Montana, on January 21, 1926. By the age of ten, Reeves and his mother had moved to Oakland, California. As he entered his teenage years the future Mr. Universe had become deeply immersed in bodybuilding magazines and bodybuilders became his heroes. In particular, the muscular John Grimek was his source of inspiration. Steve Reeves fate as a champion bodybuilder was assured.

Reeves became an avid trainer, training in a home garage gym. Eventually however, he outgrew the garage and joined Ed Yarick’s gym in Oakland. Yarick , a bodybuilder himself, tutored Steve on a regime of full body workouts three times a week and packed a mighty forty pounds of muscle onto his frame. By 1944 Reeves weighed a mighty 203 lbs and stood at a height of 6′ 1″ (185 cm).

It was also in 1944 that Reeves entered military service to fight the Japanese forces. A bout of malaria and lack of consistent training robbed him of 25 lbs of bodyweight. However after the war’s end he was stationed in Japan and resumed his regime of pushing weight and healthy eating, regaining that muscle he had lost.

At the end of his military service, Steve went back to Yaricks gym and pushed his bodyweight up even further. His eyes turned to competition. In 1946 he won the Mr. Pacific Coast competition. In 1947 he won it again and also added the Mr. America title to his trophy case. At the top of his game, Steve started to take acting lessons seeing the possibilities of his physique combined with his good looks and urbane charm.

But competition still loomed on the horizon. In 1948 he lost out to John Grimek in the NABBA Mr. Universe contest but consoled himself by winning a Mr. World title in France. In the 1949 Mr. Universe, Steve only took third place the first time he had suffered such a poor showing. Many concede that Grimek the winner did not deserve the title and that Clancy Ross in second place did not have the aesthetics possessed by Reeves.

Steve finally took the title in 1950 in a very close competition with Reg Park, idol and future mentor of A. schwarzenegger Steve announced his retirement from bodybuilding and devoted himself to acting.

He played in a number of movies through out the 1950s and through the 1960s. He tended to play powerful characters in his acting career, the most memorable of which was Hercules.

Steve Reeves died at the age of 74, on May 1 2000 in Escondido, California at the Palomar Medical Center. He died due to complications of lymphoma. He was a shining example of aesthetic bodybuilding.