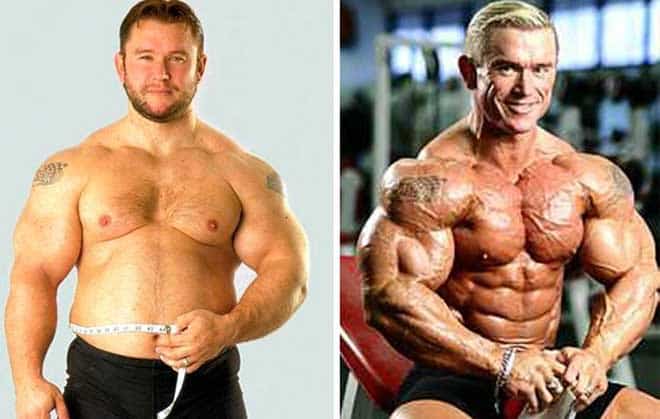 I posed the question in the first article Is It Possible To Build Muscle and Lose Fat? I aim to answer that question, and look at ways that this may be possible. First we have to look at the variables, and one of the big hormonal variables is leptin. Those of you familiar with the Fat Loss Facts series know a little about leptin, but we need to take a very close look at this hormone, as it could be the answer to whether it is possible to build and lose at the same time.

Leptin is a protein released primarily from fat cells, although other tissues such as muscle also release some as well. Leptin levels correlate accurately with body fat percentage, meaning the more fat you have then the more leptin you tend to have. At any given body fat percentage, women typically produce two or three times as much leptin as men do.

Leptin levels are also related to how much food you’re eating. In response to dieting, leptin levels may drop by 50 percent within a week, even though you haven’t lost 50 percent of your body fat. After that initial drop there is a slower decrease in leptin as related to the loss of body fat. In response to high carbohydrate overfeeding, leptin tends to rebound equally quickly. In contrast to what you might think, it looks like leptin production by fat cells is mainly determined by glucose availability – it stands to reason that it would be fat affecting this. Whenever you start losing glucose from the fat cell due to dieting, leptin levels go down, when you drive glucose into fat cells, it goes up.

Leptin accurately represents two different factors regarding how much body fat you’re carrying, and how much you’re eating. It acts as a signal to the rest of your body about your energy stores. In that sense it’s a primitive inner gauge to regulate what is happening with food intake, and energy stores.

Like most hormones, leptin effects tissues in the body, and leptin receptors have been found all over the place. The liver, skeletal muscle, immune cells, basically everywhere. There are also leptin receptors in the brain.

In the liver, leptin tends to reduce insulin secretion from the beta-cells. In skeletal muscle, leptin promotes fat burning and tends to spare glucose, and therefore amino acid use. In fat cells, leptin may promote fat oxidation as well as making the fat cells somewhat insulin resistant. Leptin also affects immune cell function, decreasing leptin impairs the body’s ability to mount an immune response. This is part of the reason you tend to get sick more when you diet.

To your body, becoming too lean is a very real threat to your survival. From a physiological standpoint, that means that your body needs a way to know how much energy you have stored. This of course is a big part of what leptin does. It’s like an energy/fuel inventory hormone, along with ghrelin, insulin, and protein YY that signal the brain about how much energy you have stored and how much you’re eating.

All of these hormones send a mixed signal to a part of the brain called the hypothalamus that update it on what’s going on. This causes changes in various neurochemicals such as NPY, CRH, POMC, alpha-MSH and others. This has a variety of effects on metabolic rate, hormone levels and nutrient distribution.

As metabolic rate goes down during dieting, levels of thyroid stimulating hormone, leutinizing hormone and follicle stimulating hormone begin to drop. This means lowered levels of thyroid and testosterone, lower levels of growth hormone releasing hormone, which may mean growth hormone output can be impaired, sympathetic nervous system activity goes down, cortisol levels go up as does hunger signals promoting greater appetite. All this means your body’s systems go completely haywire when you try to take body fat below a certain level.

I want to point out that falling leptin has a much larger impact on the body’s metabolism than raising leptin does. The body fights against dieting to a far greater degree than it does when you eat too much. This is why it’s a lot easier to get fat than it is to get lean.

So you start dieting by reducing carbs, and calories, and blood glucose and insulin levels are going to be reduced. This is good, because it releases what is holding up fat mobilization. Catecholamine release usually goes up when dieting begins, further increasing fat utilization. Blood levels of fatty acids will start to increase, and this tends to promote fat burning in tissues such as liver and muscle. If you deplete liver and muscle glycogen by restricting carbohydrate then the liver tends to increase the use of fatty acids for fuel. The increase in blood fatty acid levels also has the short-term effect of causing insulin resistance which on a diet is a good since it spares glucose, and helps promote fat oxidation.

Although the drop in insulin causes better fat mobilization, it causes other problems. Testosterone will bind to sex-hormone binding globulin better, lowering free testosterone levels. The increase in cortisol that occurs with dieting enhances protein breakdown, as well as stimulating the conversion of protein to glucose in the liver. Cortisol also prevents the amino acid leucine from stimulating protein synthesis. The drop in energy to the muscle impairs protein synthesis, so your recovery abilities will be compromised.

The high blood fatty acid levels will impair the uptake of T4 into the liver. There are also changes in liver metabolism that impair the conversion of T4 to T3. T4 is the inactive form of T3, which is the active thyroid hormone. There is some evidence that high blood fatty acid levels causes tissues to become resistant to thyroid hormone itself, so taking more thyroid hormone (which is not a good idea) isn’t the greatest idea. Along with the drop in thyroid, insulin and leptin, this explains a majority of the metabolic slowdown that occurs. The change in liver metabolism (and the reduction in insulin) also impairs the production of insulin-like growth factor 1 from growth hormone. All of these do not bode well for fat loss or muscle-building.

All of these adaptations serve two main purposes. The first is to slow the rate of fat loss, as the goal of the body is always survival. All of the metabolically energy intensive processes slow down includes protein synthesis, reproduction and immune function. The drop in leptin, and the changes in hormones that occur are a huge part of why men tend to lose their sex drive, and women lose their period when they get very lean.

The second is to prime your body to put fat back on at an accelerate rate when calories become available again. This is the reason why when you end a diet and resume eating as you were before, the weight gain occurs at a furious pace. As we know, we have evolved to survive, and our body is preparing for another round of caloric restriction. We are not designed to diet, we are designed to live, and that is the challenge we face when building muscle and losing fat.