Bodybuilders of the 90s “golden era,” usually say that bodybuilding these days lacks actual characters. Lee Priest was a bodybuilder who was able to compete several times a year without issue, that is something we rarely have seen these days.

Lee is not well known for being subtle when it pertains to dealing out the truth. He’s developed quite the credibility for it. We have seen him hand out a can of whoop-ass on Phil Heath and Bostin Loyd. But now he’s dealing it out to whoever fits in the category of looking like sh*t despite the use of steroids 365 days a year. 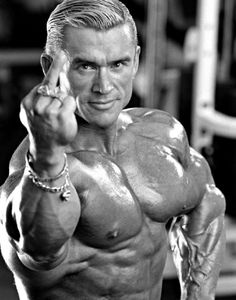 “It’s simple – they don’t want you to think that they’ve accomplished their looks solely thanks to all the anabolics they’ve taken. While it’s true that some take way more than others, it’s also true that every bodybuilders lie about how much he is using. It’s not uncommon to claim one thing and to actually take five-time the dose. It happens more often than not.”

Every few years, the bodybuilding community gets excited about a new muscle-building supplement. Turkesterone is one of the latest supps...

The triceps muscles of the upper arm are involved in so many daily tasks from scooting out of bed to...