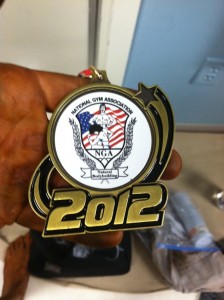 It is finally over. If you haven’t read elsewhere already, I did not place within the top five competitors at the NGA Pro Universe. Believe it or not, in my brief but successful competitive history, this is the first time I have left without a ‘favorable’ placing. I cannot say I am surprised, nor can I say I am disappointed. Surprisingly, I find myself in high spirits, which brings us to the main topic of my post today.

Before we delve into the inner workings of my mind, I will provide some details about the show itself. A lot of you follow me on twitter and I received many compliments, messages of encouragement, and status update requests throughout the day. My twitter app kept crashing so I was incommunicado throughout most of the day.

In terms of the competition, it was fierce. It was safe to say that everybody brought their A game, but at the pro level it’s pretty much silly to assume one wouldn’t. It is hard to keep in mind that everybody in the lineup won a minimum of an overall class title at some point. There were short guys, tall guys, big guys, and bigger guys!

Surprisingly, I was not the shortest on stage this time. The amazing Earl Snyder was in attendance and he actually comes in shorter than I do. Don’t underestimate this guy though. He brought amazing conditioning that earned him the third place spot in the masters and open pro classes! Earl is an amazing competitor and I have had the great fortune of being judged by him a couple of times. He will be judging the HOA Natural Classic in Washington,IL on May 4, 2013, a favorite show of mine.

I will venture to say that once again I was the lightest competitor on stage. Hey – someone has to represent the Ecto-lightweights of the world! At 144 pounds I did put up a good fight though. There were guys well over 200 pounds on that stage. The ever impressive Jason Kaiman and Paul Revelia were both hanging around that mark. Jason took a very impressive fourth place in the masters pro and a cool fifth place in the open. The overall win went to the reining champ, David Lovelace, who brought the most phenomenal level of conditioning and muscle development. He is a true inspiration and I hope to develop a strong professional relationship with him moving forward.

Also in attendance was Abraham Oluwole. There are many words to describe Abraham. The word I like to use is simply BEAUTIFUL. Yes, he is beautiful. I’m not being facetious or trying to be funny. In the nicest way possible, I am saying his body is the hand crafted image of a Greek God. He won his pro card at this show last year and returned to compete as a pro this year. Just so you can fully appreciate the strength of the competition, this amazing specimen also did not place within the top five. Again, not to be underestimated. Abraham has already experienced great success and is a sponsored trainer/athlete with a very bright and lucrative future ahead of him. He is another true inspiration that I wish to form a continuing relationship with in the years to come.

So, back to the burning topics at hand; how do I feel and what is next?

I feel…good. Just good, you ask? Yes, just good. As stated above, I’m neither surprised nor disappointment in myself. This is not to say I entered the competition with a poor attitude, or am leaving with one. With training and progressing to a higher competition weight for a new personal record, it is all a matter of trial and error. How will you know your limit if you never try push yourself beyond the perceived limits?

This show was a real eye opener for me which really helped put everything into perspective. I worked hard and I deserved to be on that stage. Nobody can take that from me or convince me otherwise. I know what is expected of me for the future and I know that I am going to have to work harder if I want to progress. It’s just business. I feel like the proverbial billionaire CEO that started in the mail room, so to speak. It’s just a matter of time, and at thirty years old I still have plenty of that left. I’m a patient guy.

I took a big step in signing up for this show. I knew it would be tough, but I had this fire inside of me that just couldn’t be extinguished. It was with the encouragement and support of Jason and my wife that ultimately brought me to the decision to compete at this event. Their faith in me alone was all I needed. As I have stressed before – surround yourself with a positive support network and you will find yourself working towards the most incredible goals! I can’t thank my wife and Jason enough for their role in everything. They both make me a better and stronger person ever day.

You’ve heard the saying, ‘the world is your oyster!’ I don’t know what is next in terms of what the future holds for me. On a more nearsighted level I can tell you I will train with an intensity and desire for greatness at an unprecedented level. But you expected a response like that, right? Of course, that is a given. I will be taking a small step back from competition, however. The truth of the matter is that I have given myself very little recovery and growth time since the inception of my competitive career. It seems that no sooner had a competition ended that I was already dieting and preparing for another. I need some good quality time to formulate a solid diet and training program to allow for optimal growth.

This cannot be achieved in a three or four-month period between shows. Sure, I will say I have outdone myself in each of my shows, but I’m seeking a different level of growth. I will be competing on May 4, 2013 at the NGA Heart of America Natural Classic. That will be my only show for 2013, and the plan is to continue to return to this show year after year. This will allow a full year to implement my new plan in between shows. Until that time I have several months to formulate and test some new ideas before I have to start prepping again.

The reason I am deciding to compete again so soon is because I have done this show twice already and am very familiar with it. To date it is the best run show I have attended. The promoter, John Abraham, is an amazing guy with a passion for bodybuilding that shows through his incredible show. John is actually sitting behind me as I type this on the plane – his involvement in natural bodybuilding has him closely affiliated with the president of the NGA, Andrew Bostinto, and he was the stage manager at the Pro Universe this year.

Of particular interest, I will be looking to retain the services of a trainer. I mentioned in my previous post how I was negatively affected by a trainer in the past. I learned a lot from that mistake and have taken considerable time and put forth a lot of effort to research and find trainers that are best suited for my needs. I have a couple of good leads at this time but no decision has been made. I am very excited about this decision. I have so much to learn about unlocking my true potential and I feel that I am on the verge of finding it.

For now I will ease my way back into the realm of normalcy as we approach Thanksgiving. Reverse dieting will begin immediately and it will not take the form of post contest bingeing like last time. I admit, Jason and I did some despicable things to two 18 inch meat lovers pizzas and 30 wings on Saturday night, but that is it. I promise.

That actually reminds me of two funny events that happened this weekend. It isn’t uncommon for a dieting bodybuilder to enter food comas or some sort of hypnosis when depleted or when the diet is temporarily broken. I’ve heard stories of massive quantities of food being devoured in a zombie state, and I personally have experienced bingeing sessions that have lasted over three hours. Anyway, an apple went missing from Jason’s room this weekend. It was his fiancé’s apple and when she wanted it she couldn’t find it. She asked Jason if he had eaten it and he replied that he hadn’t. An apple core was later found in the bathroom, obviously eaten by Jason however, he had no recollection of eating it.

That same night (Friday), I went to bed at 8:00pm, before my last meal which was scheduled for 10:00pm. I woke up the next morning next to an empty lunch box on my chest. Next to me in the bed was a half full bag of candy corn, which was full to bursting before I went to sleep. That bag was for show day. I have no recollection of getting up to eat or digging into that candy in my sleep!

I have many pictures to share from the event but they won’t be available for several days. A few phone pictures have surfaced and have found their way online, but the quality is not worth sharing here. I will follow-up shortly some good show pictures.

In closing, I again want to say thank you to everybody for your support and well wishes throughout this journey. You all inspire me to be great and your support really means a lot to me. Today is a new day and beginning of something great! Let’s start a new journey together and show the world what we have to offer!

Bodybuilding is a very popular pastime, and it's a competitive sport too. It's been around for hundreds of years, but...

You can usually spot clean muscle from a mile away, and are the “natural” bodybuilders really natural? There’s usually a...