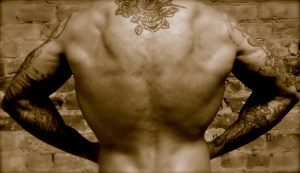 Hello and welcome back to the Tuesday and Thursday series that finally has a name. The name of the game on these days is the description of the muscles and their function, followed by the training and care of said muscles. We are basically talking muscles in these articles, hence the name Muscle Talk. This being the first ship to set sail bearing the flag of Muscle Talk, it is appropriate that I introduce you all to a new member to our crew. Carlos Flores is heading up the department of research at the good ship FitnessVolt, so the muscles and their functions have and will all be researched by him. Much like the welcoming aboard of Mrs Toronto has raised the quality of the recipes you now can find here, I expect the same jump in quality regarding any and all muscle articles due to the extra pair of experienced hands on deck. Now that I’ve taken that nautical analogy and beaten it to death, it’s time to get on with the article.

One thing you are going to learn about Carlos Toronto is that he is thorough. Maybe a little bit too thorough with his information, which isn’t a bad thing at all when you are dealing with research. When I asked him to give me the specifics dealing with the large muscle of the back, he gave me every muscle that has any function at all in the back, no mater how small. Not to mention every point of origin and insertion. As such, I may be glossing over some of the smaller muscles that we don’t train directly, but are still worthy of mention in the interests of remaining complete.

The two muscles everyone knows when it comes to the back are the lats and the traps. As you know, the newly named Muscle Talk likes to go a little deeper than just saying the abbreviated names of only two of the muscles. So if you are ready, lets begin.

The latissimus dorsi is the broad, flat, triangular muscle of the lumbar region (lower back). It has extensive superficial origins and it covered by the trapezius superiorly. It contributes to the posterior wall of axilla as well. This muscle is the main muscle involved in extending our arm. It is involved in the adduction and medial rotation at the shoulder, and plays an important role in bringing the arm down in a power stroke, such as hammering or swimming. When our arms are overhead, the latissimus dorsi pulls the rest of our body upward and downward. The terse major also should be mentioned here as it is a synergist of the lats. This is a thick, rounded muscle located inferior to the teres minor, and helps to form the posterior wall of the axilla along with the lats and the subscapularis.

Once we move past those two main muscles (and the teres minor, as well as the subscapularis), there are many smaller ones that of course serve important roles in the function of our back musculature. I’m going to group a few together here as either they are not necessarily a muscle that we directly train, or they are in theory part of the back, but in reality a separate set of muscles to be discussed another day.

Carrying on with that last thought are the deltoid muscles, the infraspinatus, the supraspinatus, and the teres minor. The reason that the deltoids are part of this conversation is because these shoulder muscles are the joint that without their contribution, the back muscles wouldn’t be usable. They are like a busy intersection for all the actions of our muscle that involve or arms, to varying degrees. The infraspinatus, the supraspinatus and the teres minor are all partially covered by the deltoids and or the trapezius, and are rotator cuff muscles. These muscles stabilize the shoulder joint amongst other functions and therefore play a role in back muscle function in more of a synergistic role.

That concludes the kinesiology and biomechanics portion of Muscle Talk. Of course the real fun begins in the next edition, as we get to get into the exercises that are best suited to both enhance function and of course strength and muscle mass. I will be working with the FitnessVolt Research Department on this as well, and the putting together of our knowledge should make for an advantageous complement to your current training.

Up next however, is the day devoted to the discovery and dissection of Super Foods. Whether your particular field of interest is building muscle, fat loss, anti-aging, nutrition, or any of the various subjects covered here, learning more about Super Foods benefits all of the aforementioned pursuits. These foods not only provide superior fuel and recovery, they are always low carb in nature and have benefits that will definitely go a long way to increasing your enjoyment of life as well as attaining your training goals. It’s really is a win/win situation. I hope to see you all here tomorrow, especially seeing as a very unusual source of Omega 3 will be making a contribution,