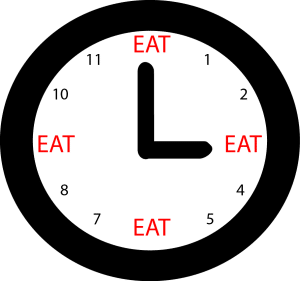 The topic of meal frequency for the fitness enthusiast is one in high debate. There are many schools of thought out there regarding how frequently one should eat, how much one should eat, and the expected results of following such guidelines. In a broad sense, those that advocate increased meal frequency adhere to the notion that doing so will result in an increase in metabolism and a greater loss of fat. Before we continue, let me stress that meal frequency is not the same as nutrient timing. Perhaps this is an issue we can touch on at a later date…

I have experimented with many meal plans and meal frequencies over the years. In my early days when I knew nothing of nutrition, I skipped breakfast, had a poor lunch, and gorged at dinner. When I first discovered the ideas behind increased meal frequency, I began eating whenever I wanted – but not meals; chips here, a sandwich there, and maybe a protein bar if I ran to the store. As I started to learn more about nutrition, the meals jumped to five, and started to have a little bit of structure to them. Once I started competing, at the advice of a guru I switched to six poorly constructed meals of little to no nutritional value. I was told that I had to eat every 2-3 hours to keep “the furnace burning.” It wasn’t until I was well into competition that I really began to understand nutrition and my body.

As an ectomorph I can burn calories just by thinking about eating. When I used to work in the field and was on assignment for weeks at a time, I would eat nothing but pizza and burgers without consequence. I suffer from night sweats – a symptom of many disorders but one I attribute to a furnace of a metabolism. I only gain weight if I continually gorge, and even then, if I eat properly for a week I lose it all. But I digress – I have a naturally high metabolism. 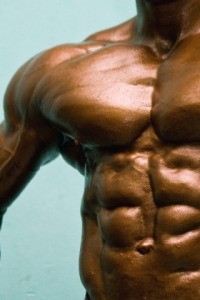 When I first began to diet for competition, the weight practically fell off of me. I was told this was because of several reasons:

1. My guru had the secrets to the ultimate bodybuilding cut diet.
2. I was eating the “correct” fat burning foods.
3. I was eating every 2-3 hours which revved my metabolism.

Not once was the weight loss attributed to the possibility that I was starving or had a naturally high metabolism.

Once I learned enough to correct my caloric needs, I continued on the six meal a day plan to keep my metabolism in check. I was so worried about getting a meal in no later than every three hours, that I would not leave the house to go anywhere without a lunchbox. I would eat during church, while driving, at school functions, etc. I was terrified of catabolizing on the spot. I was so paranoid, that I swore I could feel myself getting weaker if I went beyond three hours without a meal.

After I upped my calories, I found that I was still able to lose weight with ease and could still diet down to stage leanness. To me this was verification that my metabolism was super charged due to my “modest” calorie restrictions and frequent eating. It had to be the only answer – after all, I was eating so much and so frequently and I always felt hungry regardless of how much I ate. At the same time my wife was dieting and was not experiencing the same success. Convinced it was because she was not on a six meal a day plan, I unloaded a wealth of broformation onto her about how she was metabolically damaged.

I eventually took the time to actually research the issue. As cut phases would end and growth phases began, the results I was seeing with 4, 6, and even 8 meal a day plans were relatively consistent – with the only variable changing being the type of food consumed. What I found was completely contradictory to what I believed. A study at the University of Missouri Department of Nutrition and Exercise was performed to evaluate the effect of eating frequency on appetite control and food intake. The study was performed on the proposition that a higher meal frequency increased metabolism, reduced hunger, improved glucose and insulin control, and reduced body weight. When certain biological markers were compared for the increased meal frequency group and the reduced meal frequency group (glucose, insulin, ghrelin), there was a temporary lower peak for the increased meal frequency group. Over the course of the day, however, the values leveled out and there was no significant difference between the two groups. In terms of perceived appetite and satiety, the reduced meal frequency group showed negative results. What this study is saying is, biologically speaking, there was no difference noted in whether the subjects ate many times or just a few times. As one would expect, those that ate less frequently did feel hungrier.

The next study to catch my eye was one performed by the US Department of Agriculture. They performed a trial of reduced meal frequency without caloric restriction in healthy, normal-weight, middle-aged adults. They had determined that a diet with less meal frequency can improve the health and extend the lifespan of laboratory animals. Their goal was to determine if this was true for humans. Over two eight-week periods, subjects consumed their maintenance calories over three meals in a day, and then the same at one meal per day. Their findings:

Now it was starting to get interesting. These studies have essentially told me that eating frequently has no real significance in terms of transforming me into a fat burning machine. At best I am helping to alleviate the feeling of hunger, but on a deficit (which these studies were not performed on); I am telling you there is NOTHING you can do to help alleviate hunger. In fact, one of the studies suggested that eating LESS frequently will help to get rid of fat. Furthermore, the second study showed a decrease in cortisol.

Taking the above into consideration, I concluded that one meal a day was not in the best interest of my body, but eight or even six meals a day were not warranted. I reduced my meals to four to include breakfast, lunch, dinner, and post workout. The result – even with the same daily calories I felt as though I was starving. My stomach would start growling around three hours after a meal and my tendency to snack and nibble was increased. Even though the meals were larger and contained the same daily calories overall, in my mind I was starving. I had no other choice but to go back to six meals. 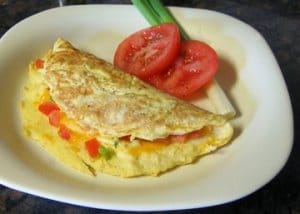 Now at six meals a day, I eat anywhere from two and a half to three hours from the time I wake up to the time I go to bed. Why so frequently? Because I like it that way. I love eating, plain and simple. I will gladly have smaller meals if it means I can have more of them. Eating is such an enjoyable experience for me that I want to experience it as many times as I can in a day. My only real concern after this decision was whether or not I was eating with enough time to actually allow each meal to digest. Depending on who you ask in the industry, you will typically get answers on how frequently to eat that range from two to five hours.

Fair enough, what it is basically saying is you will be fuller longer, but the rate at which you continue to digest will not be changed. So now we have the following points to consider before we draw a conclusion:

You may not have noticed it, but there is a growing movement in the supplement industry towards the addition of...