I would like to take this opportunity to introduce you all to Michael Anderson. He  is not only the ‘subject’ of today’s interview, but is also FitnessVolt.com’s newest columnist. If you are looking for training, dieting, or muscle-building tips, and anything else Michael feels like elaborating on, then tune in here every Sunday evening, beginning tomorrow. Today however, let’s get to know Michael a little bit better first.

L&S: When did you decide you were going to be a fitness competitor?

MA: Saturday, April 2, 2011, at about 7p.m., sitting in the audience watching my first bodybuilding show.

L&S: What led you to that decision?

MA: I never had interest in being a classic bodybuilder. I admired their dedication and athleticism, but never wanted to put on the amount of mass that they need to compete successfully. However, I attended the finals of the NPC Natural Ohio Drug Tested Bodybuilding & Figure Championship in April 2011, and discovered that the National Physique Committee had introduced a new category: Men’s Physique. Looking at the competitors, I thought “These guys look like me. That’s my body type up there on stage.” From there, it was game on! (Still, I thought I might be too old.)

L&S: Has fitness always been a big part of your life?

MA: I’ve always been an athlete of some sort. Gymnastics was my first sport, but I grew too tall too quickly to match the strength and agility you need to excel in that sport. I stumbled into Track & Field on the heels of my older brother. I was fortunate to capture a few New Jersey State Championship titles, and went on to a lucrative collegiate career at Kent State University, Ohio.

L&S: When did you start training?

MA: The seed was planted during my college years. But after graduating, working out was more about getting attention for my looks than anything else. Neither health nor wellness had much influence. So, consistency and dedication were lacking, to say the least. What’s more, I knew “how” to lift, but I didn’t know why I did the things I did, how to set goals, or how to craft a tailored program if by chance I did imagine up a goal besides “get bigger.”

Around the same time I went to that first bodybuilding show, however, I also earned my personal training certification through the National Council on Strength & Fitness (NCSF). So I now knew the “why” of exercise.

L&S: When did you get serious about it?

MA: I actually didn’t really get serious about training and competing until after my second show. A judge pulled me aside and told me that I had a good look, and that I could do well in Men’s Physique if I worked on a few things. I digested his comments and set my sights and efforts on polishing my self up. Two weeks later, I won my first Overall Title, and my second two weeks after that.

That same judge then said, “See. I told you. Now, fix this, this and this…” I’ve been a work in progress ever since. And hope to always be one…

MA: Since this is my first year competing, and I competed in 10 shows between March and July, I’ve yet to have an “off season.” I took two or three weeks off in December 2011. But, then I was back at it training for the 2012 NPC Natural Ohio in March. It was the first show I’d ever seen, and I wanted to return as a competitor and do well.

What I learned between then and now, though, is that a competitor’s diet goes way above and beyond even the cleanest “normal” person’s diet, which is how I was initially eating. Quiet honestly, I’m just now learning the power and effectiveness of clean eating, but also need to learn some balance.

For example, a solid part of my meal plan was tuna salad, prepared with low or non-fat Miracle Whip, onions and relish, eaten as a sandwich on whole wheat bread. I came to realize that the dressing, relish and onions were adding simple carbs that weren’t being accounted for in my meal plan. When I eliminated the prepared tuna salad, out went the bread too. Got rid of unnecessary garbs, but threw out good ones along with it.

I know there’s life beyond chicken, broccoli, rice and yams. But, when I did my nutritional homework, I found most competitive athletes’ diets consisted of those staples (plus tilapia). So, that was essentially all I ate for the entire month leading up to Masters Nationals in July. Everything I’ve done this year has been in preparation for competing for my pro card. So I was willing to be that strict if that’s what it takes.

Not going to lie though. I can’t wait to smash into some Chinese barbecue spare ribs or some homemade baked macaroni and cheese.

L&S: What is your pre contest and offseason cardio regimen?

MA: Pre contest cardio really depends on how I feel. Typically, however, it entails 30 minutes of morning fasted HIIT, and a second 20-30 minute session of steady state training, 7 days a week. My back doesn’t allow me to run for cardio anymore, so I’m bound to the elliptical or stationary bike.

I try not to fluctuate in weight throughout the year, so I still maintain at least 30 minutes of cardio a day, 5-6 days a week.

Here is a history of Michael’s competitions until he earned his pro card. In his first competition as an IFBB pro on September 8, 2012 he earned 2nd place. 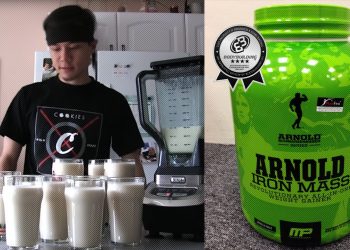