Do Women Actually Prefer Muscular Men? We Asked 1000 Women to Find Out.

It’s no secret that we live in a society where men with muscles are typically seen as more physically desirable. A well-shaped, toned and fit bod gives meaning to eye candy and it may just be the ultimate symbol of self-discipline. But to what extent of muscularity do women find most attractive? What if more women on average actually prefer the skinny look instead, or do they secretly admire the brawny musclehead?

To get to the bottom of this, we surveyed 1000 women and asked them if they preferred muscular men.

Scroll down to see our results.

Women were shown digitally rendered images of four men with physiques ranging from skinny to built, and asked a few questions based on these body types.

Women of various ages who were based in the US participated in our survey and were categorized by age group. The number of responses varied between age groups as shown in the chart.

The 25-34 age group made up the majority of participants, contributing 430 of the 1,088 total responses. On the other end of the spectrum, we received 69 responses from women in the 55+ age bracket.

The percentage of responses between age groups obviously had a significant impact on the overall results of the survey. However, the findings of this social experiment were interesting nonetheless.

And now on to the fun part…

What Did Women Say? Our Results

So, what did women prefer?

Considering these results, we can come to the following conclusions:

The results from the survey were really not all that surprising. As a society, we’ve sort of accepted that a large percentage of the female population does tend to have a preference for men with muscles. But to answer the question of how muscular… Well, according to the poll, a decent amount of muscle tone but not too much.

Hence why the athletic and lean types received the highest percentage of votes across all age groups. And based on the responses, most women prefer the built/brawny look over the skinny physique.

So, it appears that men with muscles are the clear winner here. 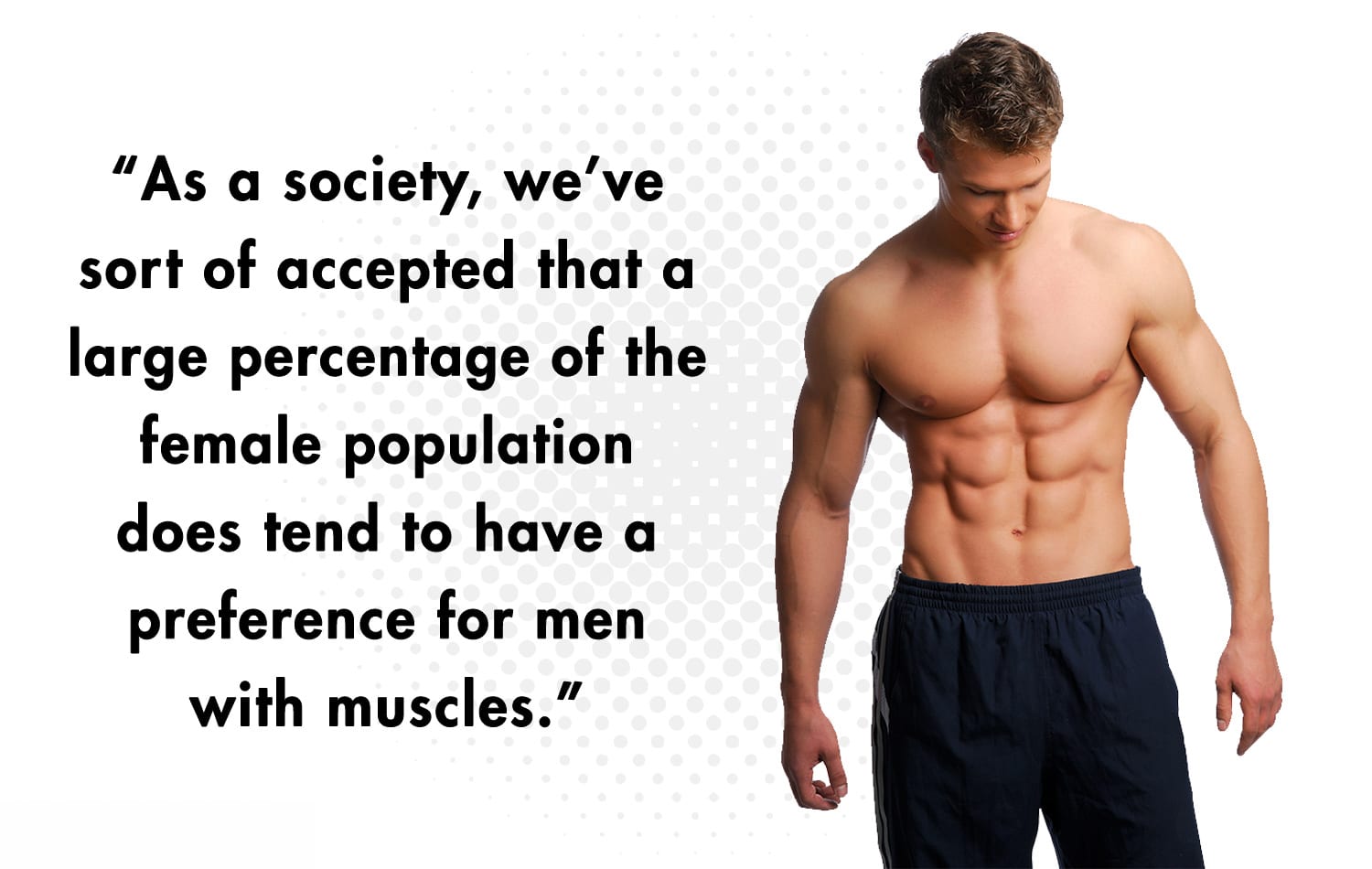 But wait, there’s more! Things get interesting when we break down body type preference by age range.

How Does Age Affect Muscularity Preference?

Why could this be?

Well, for one it may be that because men lose muscle mass as they get older, this is what women in the higher age ranges are used to and hence find attractive, whereas in the lower age ranges there is a greater number of muscular men.

Now don’t get us wrong, this is perfectly good logic and no doubt likely plays a big part.

And while there’s nothing particularly shocking about these statistics regarding body type preference by age group, we wouldn’t have been surprised if the outcome were even slightly different.

For instance, the 18-24 age group turned in more votes for the built and brawny physique than did the 25-34 age group, although there were twice as many participants in the latter age group. Therefore, this is a relative comparison, of course.

But you’d think the younger, teenage to young adult category would have preferred the skinny physique a bit more than what the chart showed. But we could just as easily see why the outcome turned out the way it did.

As for women in the 45-54 and 55+ age groups, well, it makes sense that many do indeed come to terms with the fact that most men naturally lose some of their muscularity with age (Unless they’re beasting it in the gym of course). But also, and we mean no harm to those in a younger age bracket, but many times, with more maturity and experience comes less of a focus on physical appearance and more of an importance on having a partner to grow in age with.

The results between the aforementioned age groups weren’t much different though with both mostly preferring the lean physique, even if the women aged 45-54 did account for almost twice the number of responses.

But overall, the 45-54 age group did prefer the skinny and athletic physique more while the 55+ group had more votes for the built physique, which was interesting.

We could seriously go on and on all day with possible variables that could affect the outcomes. But for the purpose of this survey, the results were what they were and that’s totally cool.

Being “Too Skinny” Vs. “Too Muscular” 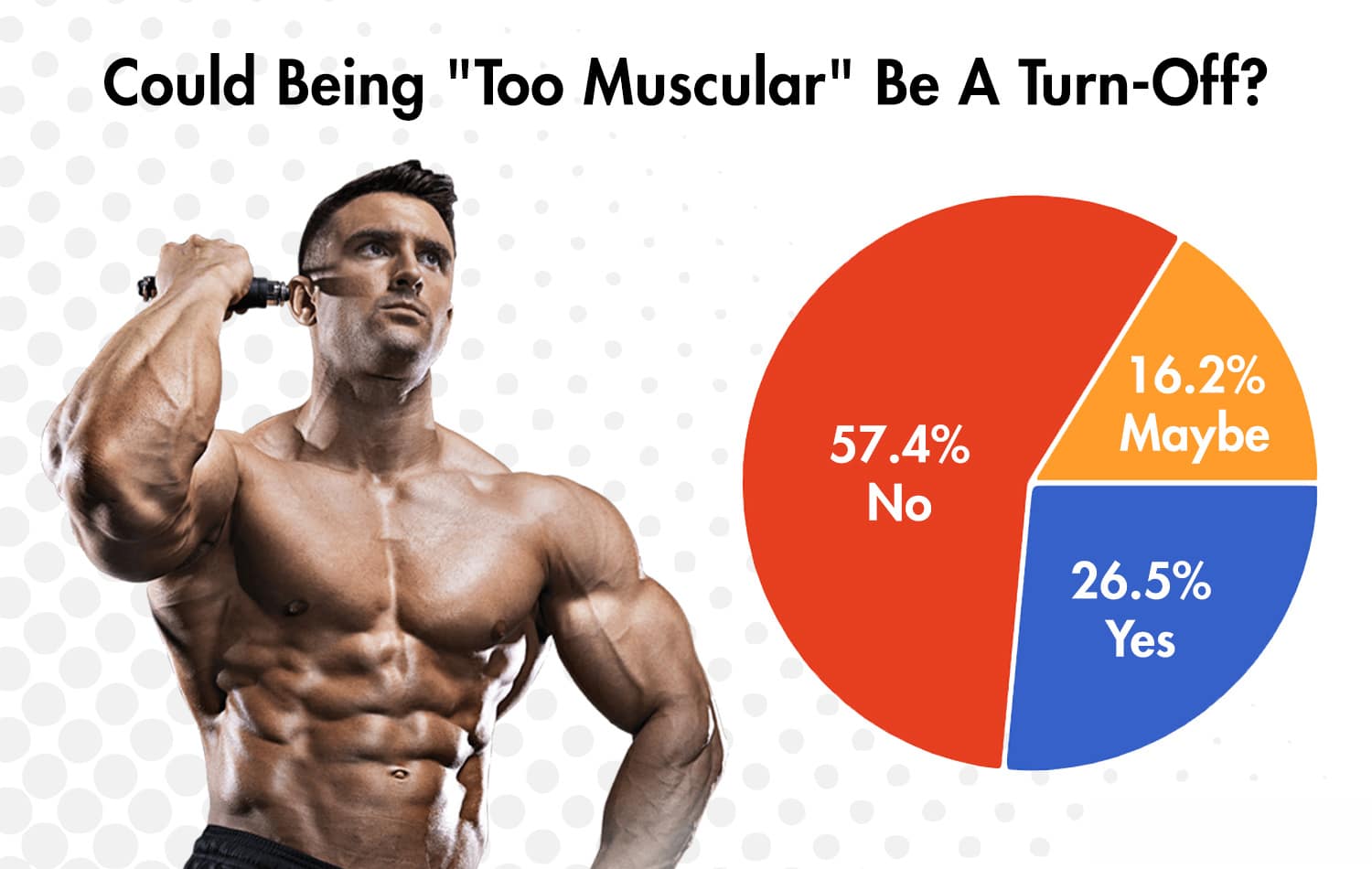 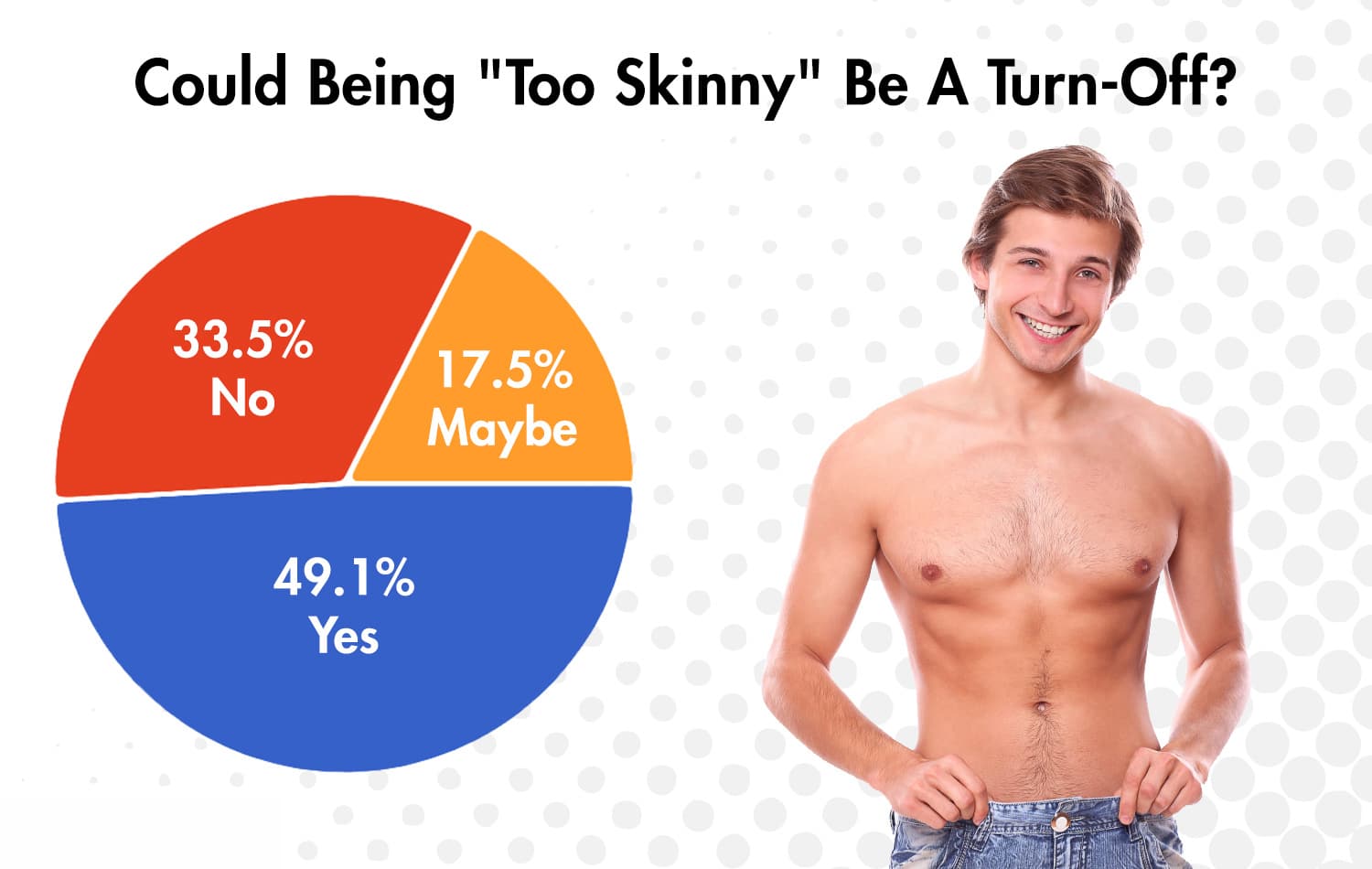 Now, let’s make one thing clear, just because someone has a preference for a specific body type, it doesn’t necessarily mean that they think anything different is a turn off or unattractive. Sometimes it is though.

Even though the built/brawny physique finished second to last overall, more than half of the women polled (57.4%) said being too muscular was NOT a turn-off. 26.5% said it was a turn off and 16.2% weren’t sure.

What can we take from all of this?

While some women did say that being too muscular could be a turn off for them, the results show that it definitely wouldn’t hurt to pack on a few pounds of muscle Men who are wanting to be more physically attractive to women might want to consider resistance training and eating more protein.

Do Muscular Men Have More Sex?

Now that we’ve covered what women prefer in terms of physical attractiveness, it’s time to address the question that everyone’s been asking – do muscular men have more sex?

But, when asked what number of recent sexual partners were muscular, the majority of women (81.4%) reported that at least one out of their last three partners was considered to be muscular (see below).

While most women indicated that a man’s muscularity was not very important when choosing a sex partner, most women admitted to having sex with at least one muscular man in their past 3 sexual encounters. This may indicate that men with a well developed, muscular physique do indeed have more sexual partners compared to men who do not fit this physical description.

Although we can’t conclude that muscularity is the only factor that contributes to the amount of sex a man might have, we can say that based on these results it seems that women are also more attracted to muscular men as short-term sexual partners. 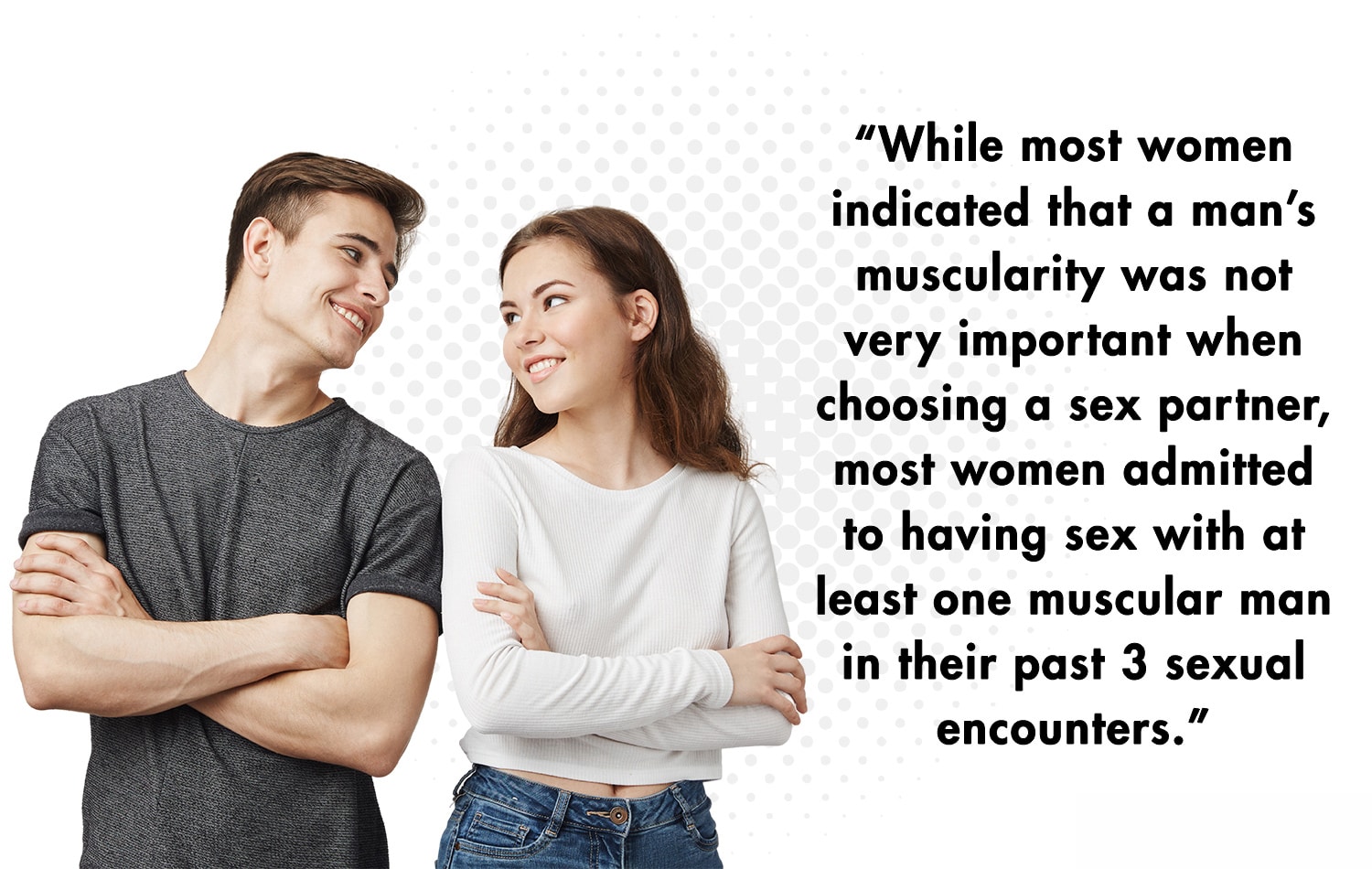 How Does Strength Factor Into This?

Interestingly enough, when asked if strength was an important factor in choosing a sexual partner, a resounding majority of women said it was either “important” or “very important”.

It may be that women place greater importance on health and physical fitness than the amount of muscle on a man. It just so happens that muscles are a visible indicator of physical fitness.

Don’t take our word for it though…

According to a review of research published in 2006 titled “Why Is Muscularity Sexy? Test of The Fitness Indicator Hypothesis”, muscles get more sex or flings.

Good physical traits and muscularity play a significant role in past partner choices and sex behaviours. You may have heard or experienced for yourself that a muscular physique is often perceived as superior for passing down good genes or increasing reproductive success.

Muscular men also find themselves to be sexier and more attractive to women, with more sexual success across the boards.

The findings suggested that “traits that are costly to develop are important components of male physical attractiveness.”

The verdict is out. Most women prefer muscles on a man… or at least that’s what the majority of the 1,088 women that we surveyed said.

While the built/brawny physique was the least favorite muscular body type, it wasn’t as much of a deal breaker as was the skinny physique. In other words, the majority of women surveyed like a body type somewhere between lean and built.

But, it’s important to note and a no-brainer of course, that physical traits aren’t always everything. Women, like men, also choose their partners based on personality, social and financial status, culture, fate, etc.

So there is more than just a single factor that determines what’s attractive to an individual.

This may be especially true when it comes to longer term relationships. According to the previously mentioned study, men with muscular physiques often make for better short term sexual partners, but having a muscular physique is not necessarily an indicator of a good long term partner.

Being perceived as physically unfit can have its disadvantages no doubt but at the end of the day, I think we could all agree that everyone should consider taking care of themselves by exercising and maintaining a healthy diet regime regardless.