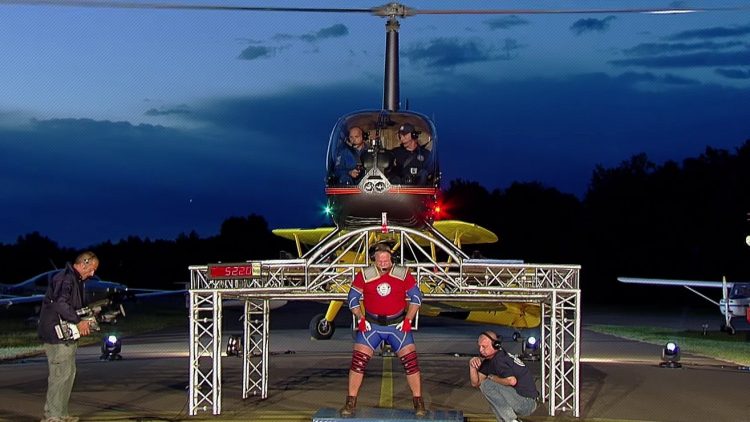 Nothing shows off your superhuman strength more than lifting a massive helicopter. That was clearly the thinking of Franz Muellner – an absolute beast of a Strongman.

In the video, attempting to break his own world record for the heaviest weight supported on a person’s shoulder, Muellner gets under a huge steel frame and lifts it up as a helicopter slowly lands on the platform.

The chopper slowly lowers on to the platform – with Muellner still holding it up.

A face of pure determination swept across his face as the kilograms racked up at a terrifying speed on a counter.

Muellner needs to hit 900kg, or 1,984lbs, on the scale before he officially breaks the record, which he seemingly does right before crashing to the ground in exhaustion.

He crumples to the floor after the huge exertion – again defeating his own record.

But, wait—there was a technicality due to the weight load dropping below 450kg during the lift, therefore negating his attempt.

Well, better luck next time, Franz; but cheer up, mate, because you still hold the record.

Check out his other world record in the video below.