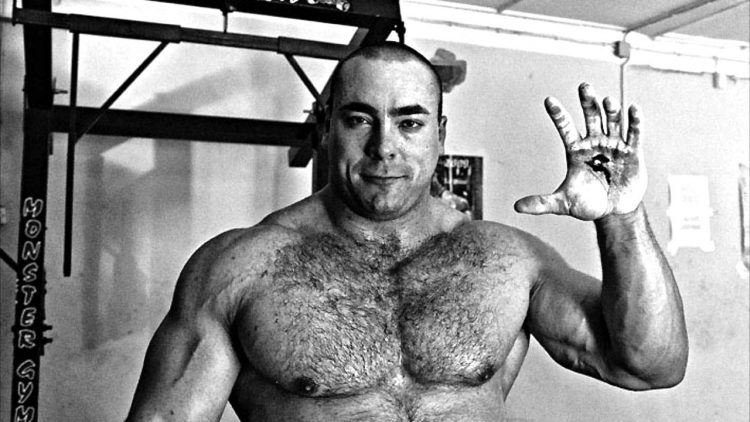 Powerlifter Konstantin Konstantinovs Passed Away At 40

Its sad day for the powerlifting and bodybuilding community. One of the all-time greats has left us too soon. Konstantin was a monstrous lifter.

He held the raw, equipped, drug tested world deadlift record at 426.0 kg. He preferred doing everything old school style, with as little technological assistance as possible. His aggressive lifting style made him a legend among fellow powerlifters and made him the only man that struck fear into the barbell itself.

Every time he would perform a lift it looked like as if the weights were getting raped. He was that focused and strong. When he wasn’t destroying weights as they owed him money, he often worked as a bodyguard in Russia. Which, according to some speculative comments is probably the reason for his early death. According to a forum post, he was killed while working as a bodyguard. Take this info with a grain of salt because, at this stage, it’s still a rumor, a very loose and unconfirmed rumor.

Now let’s all take a moment and appreciate the life of one of the strongest people to ever walk the planet earth. For starters here’s his interview with the Russian bench press record holder Kirill Sarychev from 2015.

As you can see in the video Konstantin was as intimidating in casual conversation as he was when lifting heavy weights. He was a big believer in mental preparation of a lift. He recites an encounter before a powerlifting meet with the Strongman legend, Benny Magnuson. Magnuson suggested they pray to Odin as Odin protects big, strong, beared guys(not making this up, those were the scary man’s words). So they prayed, and even though Benny’s prayer was in Icelandic and Konstantin didn’t understand a single word, the sheer intention was more than enough. He felt a rush of adrenaline and went for a 400kg deadlift. He says he never felt that much weight in his hands and thought he would fail then he said the following to himself:

If this isn’t the definition of a badass I don’t know what is. The best part is, that wasn’t even his best lift, this is.

Kirill Sarychev who holds the heaviest raw bench press of all time and the president of the World Raw Powerlifting Federation was the first to post about Konstantinovs death on Sunday afternoon saying, “Rest in my peace, my friend…”

Then another fellow deadlift expert Cailer Woolam pay respect on social media which got widespread attention.

RIP BIG GUY. I’M GLAD I HAD THE OPPORTUNITY TO MEET YOU; IT WAS ONE OF MY FAVORITE EXPERIENCES DURING MY TRIP TO RUSSIA. THANKS FOR ALL THE INSPIRATION OVER YEARS ❤️

Another person who paid respect to the fallen giant was the American deadlifting machine, Dan Green.

Dan basically says the same thing you can conclude by just skimming through his interview with Kiril. Konstantinovs was an extremely passionate man who stroke fear into everyone in eyesight just being alive. He was what regular people think all powerlifters are. A giant, terrifying Russian lifting machine capable of squeezing a lump of coal and turning it into a diamond.

When it’s all said and done, the Latvian born Konstantin Konstantinovs will be remembered as a highly intelligent passionate and terrifyingly intimidating man. His main train of thought was to never leave what you can do today for tomorrow.  If you feel like you can get a record today, do it. Go for it, don’t leave it for the next day.

“..if you feel that you can lift the record today, never postpone it for tomorrow. Tomorrow may just will not come”

Team Fitnessvolt sending out our condolences to all the athletes who got affected by his death, especially his family. Rest in peace, -Konstantin Konstantinovs.

10 Growth-Inducing Back Exercises To Add To Your Arsenal

Hafthor Bjornsson Is The Winner Of World’s Ultimate Strongman!