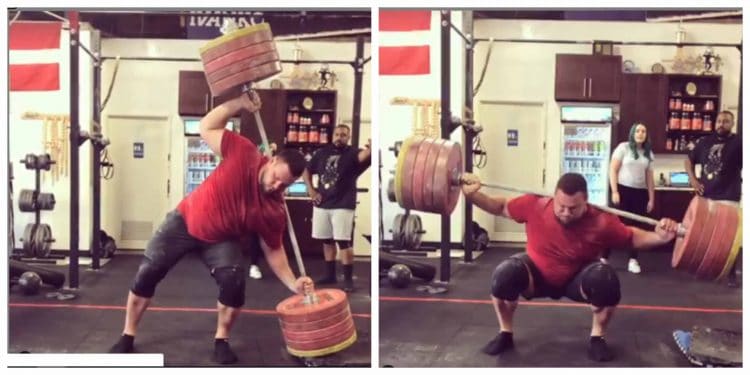 Martins Licis Steinborn is one of the top guys that are gunning for Thor’s crown as the World’s Strongest Man. He’s got charisma, strength, a great sense of humor and it’s only a matter of time before he manages to edge out The Mountain for the Iron Throne.

Martins has also perfected an old and very awkward lift, the Steinborn squat. Named after the man who practiced and perfected it (before Martins), Milo Steinborn. The lift is very specific and requires some good balance, core strength and practice. It’s a squat variation form a time where there wasn’t a squat rack so all avid athletes/squatters had to perform the lift with the bar standing upright.

After they’ve gotten a good grip and balance of the bar they would squat down and allow the weight to essentially “fall”, or more accurately, rock over and their back.  They then perform the standard squat as you know it today, but when they would finish they wouldn’t just drop the bar. They would have to rock over the bar back to a starting/standing position. As the years progressed, the fitness community developed the squat rack as a way of holding a heavy barbell and thusly eliminating the Steinborn way of squatting.

Fast forward to about a hundred years later, Martins Licis was probably scrolling random Wikipedia articles and youtube videos when he discovered the magnificence of the Steinborn squat. As he was already a Strongman who lifts heavy shit for a living, saw the Steinborn squat lift as a definite challenge he can beat-which he did in 2018.

Well, as of 3 days ago, Martins has equaled his old world record and he is now gunning to break his old record at this years CrossFit Games. Why the CrossFit Games, your guess is as good as mine…I’m guessing if he Martins gets injured they are going to include Steinborn squatting for reps in the next year’s competition.

Anyways, here is Martins equaling his best Steinborn squat number. He also gives a quick rundown on how to do it why it’s totally safe if you know what you are doing.

DISCLAIMER: Do not try this without understanding the technique or mechanics of the motion. You can visit my YouTube page for a breakdown of the lift, and why it’s safe if done right. IF DONE RIGHT, this motion poses a very low chance of injury, because the torso is braced against the leg upon receiving the weight, and the disks have nowhere to slip (note how I press my torso into my thigh before pulling the weight onto me). Also, the knees receive the weight deep in the hole, where my femurs are angled below the knees to allow for a lower sheering force on them (instead of the weight pressing down on the knee, it is hanging from the knee