Squat Every Day: The History Of The Squat

Ready for the most badass history lesson you’ve ever had? Learn about the most powerful of all muscle-building exercises from the legends who introduced it to the gym long ago!!! 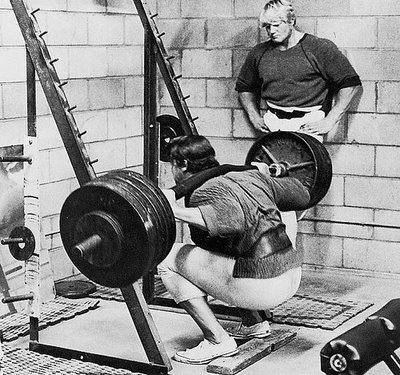 People call the squat the “king of exercises.” But it’s more than that. It’s the first exercise you ever did—and nobody even taught you how. You invented it—we all did—deep in our early childhood, the first time we needed to pick up a toy off the ground. Back then, we didn’t know the movement even had a name, but we knew we could rest comfortably in it for minutes on end.

Some of us stop squatting as we grow up. In some cultures, it remains the default rest position, and you’ll see people casually squatting as they wait on street corners and train platforms. But others take the squat dead seriously, putting immense loads on their backs. They squat to break records, or to build superhuman legs. At its best, the motion is the same as when you were a child. You sit down; you stand back up.

As an exercise, the weighted squat has its own unique history which predates bodybuilding, powerlifting, and even Olympic weightlifting. Its roots stretch back to the days when weight training was the domain of professional strongmen, who performed incredible feats of strength in front of wide-eyed audiences.

You probably don’t associate the most famous Victorian strongman with squatting. He is better known today as the first bodybuilder, as well as the inspiration for the Sandow trophy given annually to the winner of the Mr. Olympia title. His legendary physique was the product of a life spent putting heavy dumbbells, barbells, and kettlebells overhead using a wide range of presses, jerks, and snatches.

But legs like his weren’t the product of overhead lifts alone. In his landmark 1894 book “Sandow’s System of Physical Culture,” he also made one of the earliest recommendations in print to use squatting movements for quadriceps development. In a description that holds true today, he wrote, “By bending the knees, dip the body in a vertical line to the heels, keeping the back straight and the chin drawn in. Recover and repeat the movement until the muscles ache.”

German-born strongman and wrestler Henry Steinborn was perhaps the world’s first squat specialist, at a time when heavy squats were still relatively unknown. He could also more than hold his own in more famous lifts—including a 375-pound clean and jerk that stood unmatched for years—but today he is best known for a squat variation that came to be known as the “Steinborn lift.”

Steinborn’s namesake movement is an unassisted heavy squat wherein the lifter tips a loaded barbell onto his back, squats for reps, and then tips the barbell back over onto one side. Steinborn lifted over 500 pounds in this manner for reps, a number unthinkable in today’s gym. Steinborn remained an active exhibition lifter and wrestler for decades, but his major contribution was to cement the barbell squat as a staple of strength and power training.