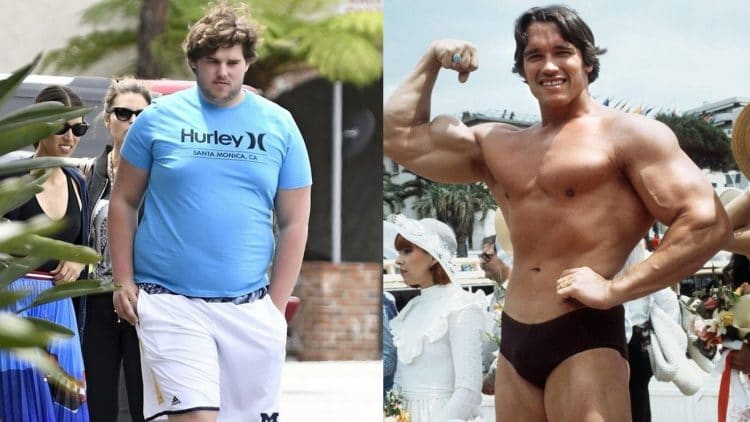 Being Arnold Schwarzenegger’s offspring must be a tricky thing to juggle, but Christopher Schwarzenegger doesn’t seem to be doing too bad a job as he successfully negotiated the Los Angeles streets for a lunch out.

Christopher, 19, dressed down in a blue Hurley t-shirt and white shorts was spotted out with his mom Maria Shriver and sister Katherine Schwarzenegger for a meal in LA’s posh Beverly Hills district.

He was seen wearing a bright blue sports top, white board shorts and trainers in the warm Californian sunshine and looked a little preoccupied as he strolled down the street.

Mom Maria was also wearing sports gear as she wore her phone on a cross-body handle and carried a takeout salad in one hand.

However, Arnold’s oldest child Katherine didn’t appear to have stepped straight out of the gym as she was dressed in skinny black jeans, a gray cropped sweatshirt and a leather biker jacket flung casually over her shoulders.

Her long brunette locks were worn in two chunky braids and she carried a sky-blue handbag in the crook of her elbow.

Arnold and Maria split back in 2011 after it emerged that he had fathered a child with his then-housekeeper Mildred Baena.

Joseph Baena was born on October 2, 1997 – just five days after Maria gave birth to his half-brother Christopher on September 27, meaning both women were pregnant with Arnold’s children under the same roof at the same time.

And it wasn’t until his illegitimate son got to the age of seven or eight for Arnold to realize he was his own offspring, as he revealed last year while promoting his book Total Recall: My Unbelievably True Life Story.

“If you would have asked me 10 years ago, five years ago, two years ago, what is the most important thing in my life, I would tell you over and over, it’s my marriage, it’s my family,” he told 60 Minutes.

“So the thing that really meant the most to me kind of fell apart because of my doing. That is something that I will always look back and say, ‘How could you have done that.'”

He’s currently a full-time student enrolled at the University of Michigan.