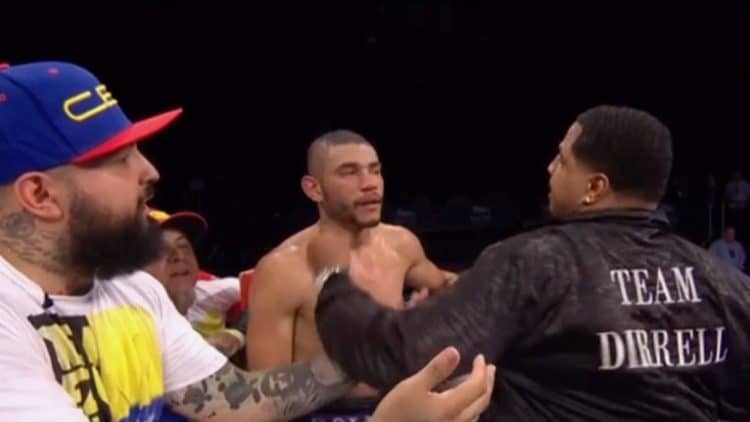 The fallout from trainer Leon Lawson Jr.’s shocking behavior following his nephew Andre Dirrell’s victory on Saturday night at the MGM National Harbor in Oxon Hill, Maryland, began on Monday with two significant boxing organizations coming out against him.

The WBC announced that it has indefinitely suspended Lawson from participating in any WBC-sanctioned fight “in any form or manner.”

Also, the Association of Boxing Commissions, a national nonprofit organization that represents state and Native American tribal boxing commissions and works with commissions to standardize rules, encouraged all member commissions to refuse to license Lawson.

Dirrell claimed a vacant interim super middleweight world title by controversial eighth-round disqualification after Jose Uzcategui drilled him with a three-punch combination, the final punch landing while the bell was still ringing to end the round on the Gary Russell Jr.-Oscar Escandon undercard.

Love is really, really strong in the Dirrell family.

Dirrell went down hard, face-first, and referee Bill Clancy ruled that the final punch landed after the bell and that Dirrell was unable to continue. As Dirrell was being attended to by the ringside doctor, Lawson stormed across the ring and unleashed a bare-fisted combination at Uzcategui. A left hand landed square on his face and the incident nearly ignited a riot in the ring.

Uzcategui was restrained by his handlers, and Lawson also was pulled away from him, but Lawson then slipped out of the arena during the postfight confusion and was still wanted by police on Monday.

The WBC slammed Lawson for his behavior.

“The actions, which have been seen all over the world in which Mr. Lawson attacks and punches with bare fists Uzcategui, have created regrettable damage to our sport,” the WBC said in a statement. “The WBC rejects any form of foul play, aggression and behavior. We will seek a meeting with Mr. Lawson to offer several forms of help to address this grave situation.”

Dirrell won an IBF-sanctioned title belt but previously has boxed for the WBC super middleweight world title, losing a split decision to Carl Froch in 2009.

Michael Mazzulli, the president of the ABC, who also oversees boxing for the Mohegan Tribe at Mohegan Sun in Uncasville, Connecticut, issued a statement on the situation.

“The Association of Boxing Commissions feels it necessary to encourage all member commissions NOT to license Mr. Leon Lawson as a cornerman, based on his assault to Jose Uzcategui,” Mazzulli said. “Commissions have many regulations in place directed at the safety of participants. Even though it appears Lawson was reacting to a late strike in the match, NO cornerman or trainer should be so out of control as to take a punch at anyone, and certainly not at the opposing fighter.

“As the president of the ABC, it seems that the action by Mr. Lawson was not only unprofessional but probably also criminal. The sport of boxing does not condone or excuse Mr. Lawson’s criminal act and it is my personal hope the state of Maryland will take direct action against Mr. Lawson. All commissions should refuse him license as a second/trainer anywhere in the Unites States. Instances like this one give the sweet science a black eye.”