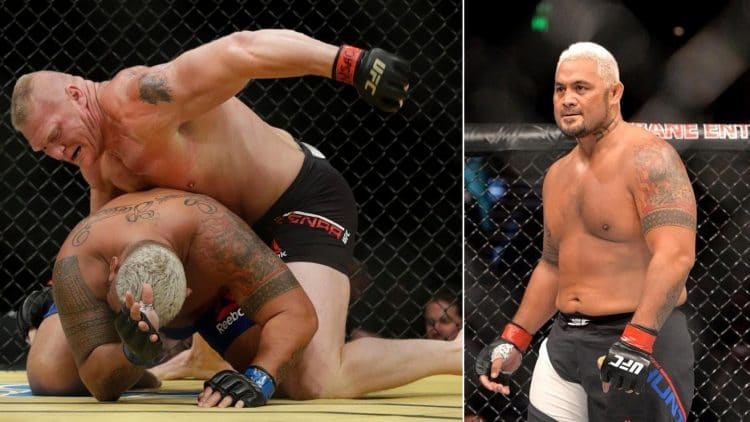 UFC STAR Mark Hunt’s high-profile case against the UFC, Dana White, and Brock Lesnar have been boosted, as his lawsuit survived a motion to dismiss.

Lesnar beat Hunt by unanimous decision – However, Hunt has accused the UFC, White and Lesnar of knowing about the failed test before the bout.

The claims goes further, stating Hunt was financially and physically damaged by what his legal team have alleged was a criminal conspiracy.

The complaint reads:“LESNAR, WHITE, and UFC, acted in concert as set forth fully above, to defraud HUNT and commit a battery against HUNT by a scheme to knowingly pit HUNT, a clean fighter, against LESNAR, a doping fighter, to the wrongful benefit of Defendants and to the detriment of HUNT.”

Lesnar was later suspended by both USADA (United States Ant-Doping Agency) and the Nevada Athletic Commission (NAC) and fined and his win overturned by the NAC.

The complaint includes a text message exchange between Hunt and White, where Hunt shows concern Lesnar is using performance-enhancing drugs.

Hunt asked White on June 8, just two days after the fight was officially announced by the UFC, what would happen if Lesnar is “positive for cheating.”

White replied back that “USADA is testing the s*** outta him.”

Lesnar was only tested beginning about one month out of UFC 200. Lesnar did pass multiple USADA tests in June before a June 28 sample — taken 11 days prior to the July 9 fight — came back positive after UFC 200.

The complaint continued:“On information and belief, WHITE and UFC were intentionally delaying the announcement because LESNAR was using banned substances and needed additional time in order to circumvent testing procedures.”

In interviews to preview UFC 200, Hunt claimed he knew his opponent was “juicing,” but didn’t care and would knock him out anyway.

The UFC’s legal team included that in their motion to dismiss the case.

Hunt wants compensation for loss of earnings after the defeat, lucrative personal appearances and endorsements, he claims have been lost due to his defeat.

The complaint mentions failed drug tests by two previous Hunt opponents, Frank Mir and Antonio Silva, and a questionable Vitor Belfort drug test before his fight with Jon Jones in 2012.

All this is alleged evidence of the UFC’s questionable handling of past doping situations.

The complaint goes on to say:”“Had HUNT known of WHITE, UFC and LESNAR’s doping scheme, HUNT would have declined the fight, negotiated a far more lucrative agreement contemplating a clean fighter being subjected to hand-to-hand combat with a doping fighter, or otherwise protected his interests.”

He’s also asking the court for the defendants to expel their “ill-gotten profits.”

WATCH: How To T-Bar Rows By Seth Feroce