The fan favorite undefeated Bellator MMA star Michael “Venom” Page is one of the most famous MMA fighters outside of the UFC.

The English fighter currently has a 12-0 MMA record, 7-knockouts, 3-submissions, and a highlights reel a mile long due to his unorthodox style.

And tonight he made good on his professional boxing debut from inside the Indigo at the O2 club in London, England, as ‘MVP’ finished opponent Jonathan Castano via third-round TKO.

MVP become the second MMA fighter this year to step out of the Octagon and into the boxing ring.

A happy @Michaelpage247 as he starts his boxing journey with a win on his pro debut. #DaveFightNight pic.twitter.com/sM9rP67euR

It took “Venom” just two and half rounds to finish Castano.

Castano had nothing for the mixed martial arts standout through the first two rounds. MVP looked amazingly confident in his hands and ability to stretch the ring.
When the third round began, the 30-year-old turned up the heat and put Castano away with a brutal straight right hand. 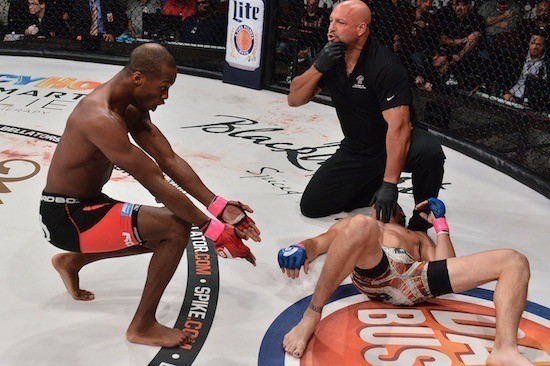 Despite the successful transition to boxing, MVA’s next fight is expected to take place in Bellator MMA, as the undefeated Englishman makes a push towards welterweight standouts like champion Rory MacDonald, former champion Douglas Lima, and knockout artist Paul Daley.

As per the Bellator President Scott Coker, should “MVP” come away unscathed from his boxing debut, he will be added to Bellator 191 on December 15 in Newcastle, England.

Just spoke to @ScottCoker. If @Michaelpage247 comes out of this boxing match unharmed Bellator will book him for Newcastle on Dec 15th.

Check out the knockout on the video player below:

Good News: Lee Priest Released From Hospital, Fired Back at ‘Sick Because of Steroids’