No Result
View All Result
Posing 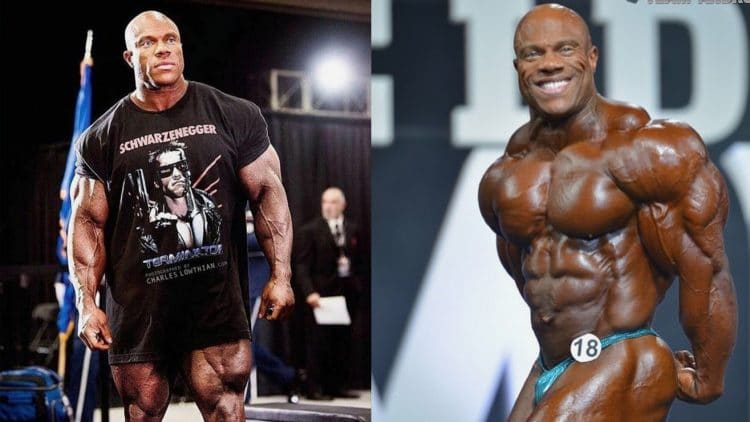 Phil Heath in his first interview since winning his 7th Olympia title revealed he could have died on the stage after ignoring what proved to be a life-threatening medical condition. The 38 years old champ said:

“You know I almost died?”

Phil Heath explained his intestines exploded ‘from his stomach’:

“I was faced with Intestinal Strangulation and what that does is… it cuts off the blood supply and later on can lead to the emergency surgery leaving into possible death.”

One hernia was above his belly button that spread two inches wide on each side where his upper intestines were caught within the torn tissue and muscle and a lower abdominal hernia, a part of his umbilical hernia that was thought to have been repaired.

“When the surgeon opened me up, my intestines exploded out. It was a nightmare.”

This lower hernia was torn from side to side, causing Heath to have a three-inch hole that was an inch deep and had four inches of his small intestines hanging over that hole.

“As soon as the doctor went in his stomach to perform the surgery, all of his intestines just spilled out of him.

The doctor was able to push his intestines 5 inches back down into his abdomen and tightened his abdomen together and closed the holes.

The doctor came to me after the surgery in shock that Phil was able to live this way. He had intestinal strangulation and he would have died if he ignored it. That is what the doctor said. By the grace of God they found it at the right time

He was in a tremendous amount of pain before but he just ignored it to get through the comp. He thought he could not be broken.”

Phil Heath has the heart of a champion to compete with two hernias. After the 2017 Olympia, Phil Heath has been getting a lot of flack as of late. His performance at the Olympia left a lot to be desired for many and the vitriol was thrown his way has been pretty brutal. Nevertheless, Phil Heath is still a seven-time Olympia champion and should be given respect.

But if the champ hasn’t earned your respect yet, then maybe you’ll change your mind when you learn just four days earlier to his Hernia Surgery, Phil Heath flexed his way to his seventh consecutive title win with internal bleeding.

“Going into the Olympia I had some discomfort. Phil Said. But being a champion you just have to block out all pain…”

Phil said he never knew the problem was so serious:

” I was struggling and I thought it was a hernia and I took iron tablets and vitamin injections.”

Phil Heath now set his sights on becoming one of the greatest bodybuilders in history by equaling the joint Mr. Olympia record of 8 titles, held by Ronnie Coleman and Lee Haney. Heath said:

I’ve been cleared to Train,  I’m happy to relive, I’m starting from scratch… My target was winning 10 Olympia titles but now I could be more as I got through this (hernia)”

Check out guest posing below:

“I have traveled all over the world and this is surely one of my most memorable experiences. The people and the hospitality have been great. I would like to come back here in 2019 when I break the Olympia record with a ninth win,” Phil said.

What do you think can Phil Heath win 10 Titles? Let us know in the comments below!

Bodybuilder, 34 Dies of Heart Attack On Stage At Bodybuilding Contest