UFC lightweight champ Conor McGregor has again found himself at the center of a wild plot involving some extremely heavy hitters. But this time he may have bitten more than he can chew after reportedly getting into a barroom brawl with the wrong people.

According to sources, McGregor got into a pub fight with Irish gang Kinahan, Graham “The Wig” Whelan, after having hit a senior associate in a south Dublin pub, reportedly Irish mafia figures are now seeking retribution. The gangster is apparently one of the most feared criminals in Ireland and was a key figure involved in clashes that saw a number lives claimed at the turn of the century. 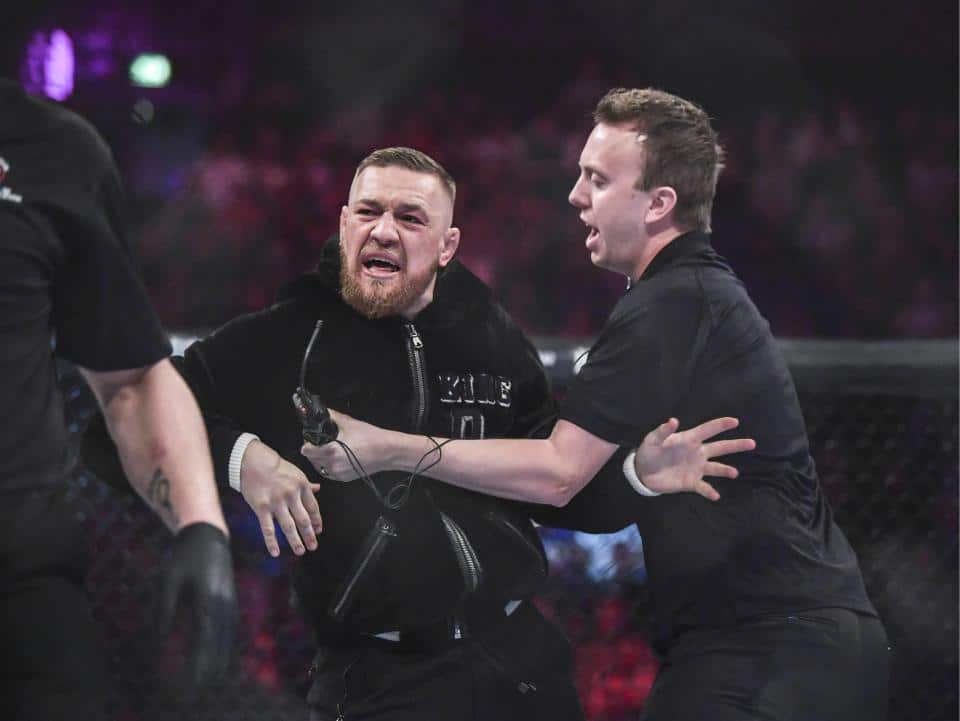 McGregor alleged to have struck a member of the group before an associate of Whelan’s jumped in and was punched twice by McGregor. He then reportedly punched the third man before security had to escort him out of the pub and into a car.

According to an Irish police spokesman, they aren’t investigating because:

“there is no report on this matter and no complaint from any injured parties, patrons of the pub or the pub itself and no statements were taken,”

Word of the fight reached UFC president Dana White but the MMA boss said he hadn’t received any information regarding the brawl.

Local Irish media reported that a “well known Irish celebrity assaulted a close associate of a senior Kinahan cartel henchman” — but did not mention the 29-year-old mixed martial artist.

Screenshots of Conor McGregor allegedly in the pub have made the rounds on Irish social media, with some messengers alleging that Notorious must pay Graham “The Wig” Whelan a sum of nine hundred thousand euros or face being shot by the gangster. 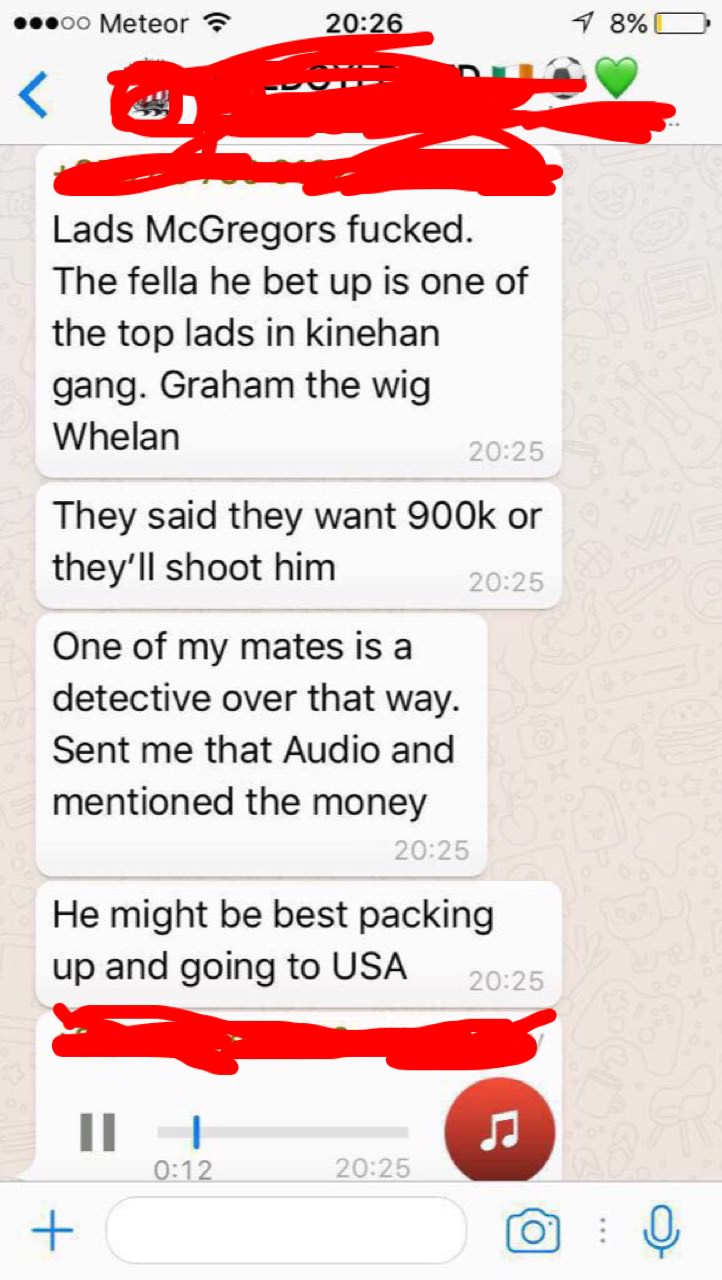 McGregor did post to Instagram with a subtle message following the headlines, suggesting he was involved in the brawl. The post was captioned as “The celebrity”.

Unconfirmed reports claim Kinahan gangster Whelan has demanded McGregor pay restitution of $1.4 million or the crime figure will have have the professional fighter shot.

These rumors are not supported by any evidence, the online site craziestsportsfights.com claims to have uncovered an unverified audio recording from a source with knowledge of the situation

The source claimed the altercation at the Black Forge stemmed from an earlier incident where a close friend of McGregor’s was targeted.

“The first girl, Meghan Whelan, so her brother is Graham Whelan out of Crumlin. Also known as The Wig,” the audio clip claims.

“He’s major, so that’s not going to end well for him (McGregor). He went to the pub and he was trying to get at Ryan Burne (another Whelan associate). Ryan Burne is who he gave the digs (punches) at.

“So Meghan Whelan’s dad was in the way, and he ended up getting a boxing to the head as well and he (McGregor) was smashing Ryan Burne up. Ryan Burne’s only a little skinny **** from Crumlin, but he hangs out with Pat and Paulo Timmins.

“Now a couple of weeks ago, he (McGregor) smashed the two of them up because the Timmins’ sent people up to Andy Murray’s house. Now Andy Murray (not the tennis player) is also another heavy (involved in organized crime) but I don’t know why Conor’s even getting involved in any of it, to be honest.

“They send people up to Andy’s house, and there was a bit of trouble up at Andy’s house so I’d say he’s only gone up there to say… ‘What’re you doing sending people up to my mate’s house?’ and smashed them up. But yeah, your man Ryan hangs around with them fellas, so I think he was just guilty by association, and that’s why he got the digs (punches).

“But the fact is that Whelan’s awfully big in the hits (assassinations). It’s all going to kick off, so buckle up, it’s going to be a bumpy ride.”

Another website The MMA Bible has also reported claims from people claiming to have witnessed McGregor involved in the bar fight. 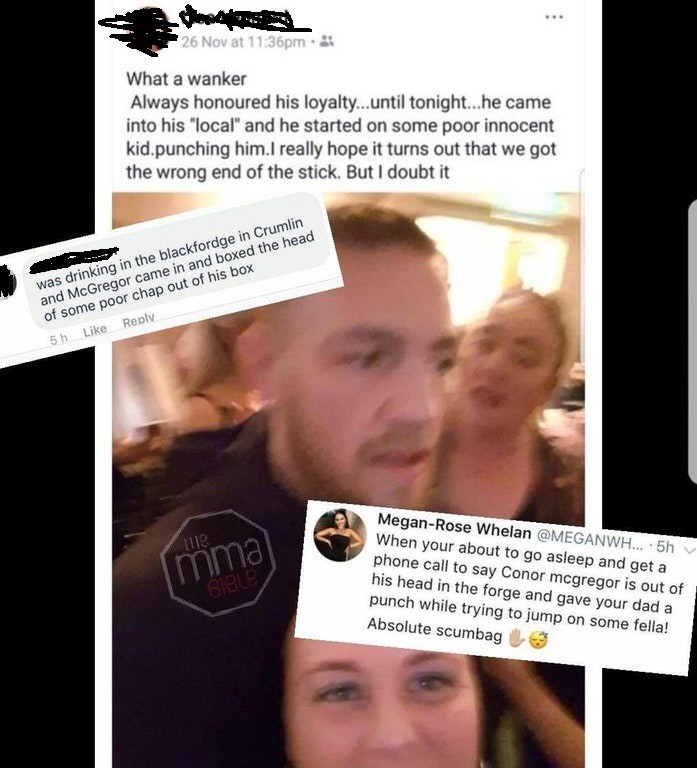 “I’ve lost all respect for McGregor after tonight.” 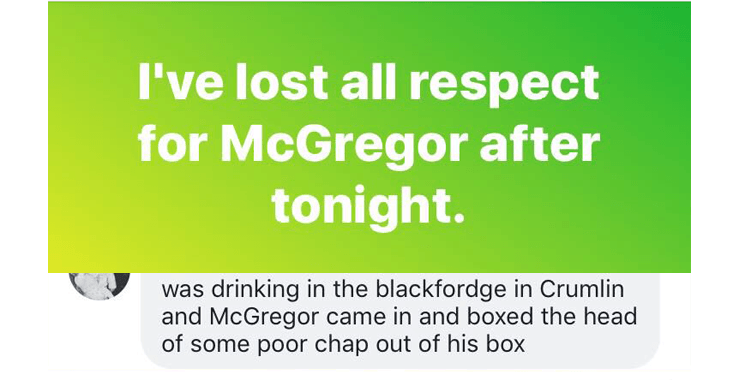 What are your thoughts on the alleged rumor involving Notorious?