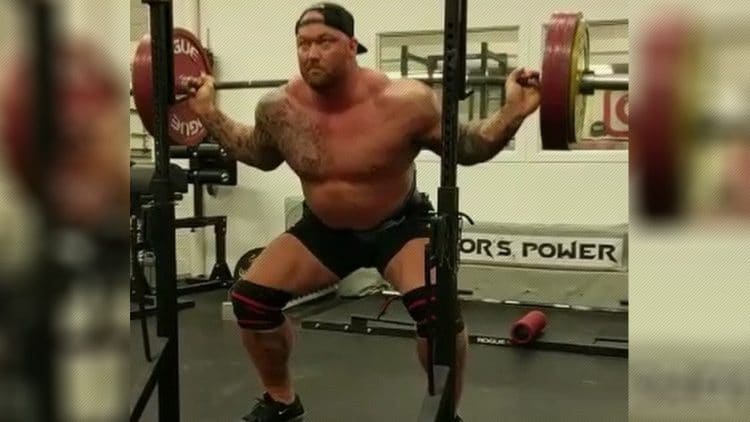 Just when you’re feeling good about the good work you’ve been putting in at the gym. I’m convinced that this guy isn’t human, he’s a super machine disguised as a human. Seriously, watch as he cranks out the reps like it’s no big deal.

In an impressive squat video, Hafthor Bjornsson, aka “The Mountain” the current World’s Strongest Man showing off his freaky power. The Mountain, squatting 440 pounds an incredibly impressive 29 times in a throwback video posted on his Instagram 3 days ago.

His depth and speed both looked pretty good.

The deadlift is the single best exercise but the barbell squat is a classic for a reason. Squats builds up every muscle in your lower body and its a must for anyone looking to develop the legs power.

The Mountain is crushing his legs for as he has set his eyes on a 1,000-pound squat sometime in the future.

On top of his crazy squat strength, Bjornsson is also pushing his deadlift to new feats. In one of his Instagram posts he hints going after Eddie Hall’s 500kg deadlift world record in the 2018 season. Check out Bjornsson’s last deadlift video highlighting a speedy 350kg (770 lb) 2×2 deadlift session.

What do you make of Hafthor’s gains?

Conor McGregor In Plea Negotiations Over His Bus-Attack Case