WATCH: Shawn Rhoden ‘I Plan On Dethroning Phil Heath’ At The 2018 Mr. Olympia

Shawn Rhoden is one of the best bodybuilders in the world and once considered to be the top threat to Phil Heath’s Olympia title. While Shawn Rhoden may not have had the best placing in the 2017 show, the veteran bodybuilder is looking to right some wrongs as he heads into the 2018 competition.

Shawn Rhoden has had to battle through some tough times over the course of this year, dropping in the rankings and suffering from extreme dehydration, two ulcers, and a severe case of the flu – ahead of the Arnold Classic 2018, forced him to sit out.

With the Olympia is only two weeks away, the top contenders in the Open Bodybuilding division are doing their best to prepare for the biggest show in the world and the veteran bodybuilder is looking to right some wrongs as he heads into the 2018 competition.

In a recent interview with 4-time Mr. Olympia Jay Cutler, Shawn Rhoden discuss about his recent injuries and his game plan to dethrone the defending champion, Phil Heath.

“I’ve worked on everything that I need to work on for this Olympia and I’m a hundred percent sure this is not gonna be an easy fight.”

Jay asked Shawn: There’s occasions you thought you could have won that show correct when you were 2nd at Mr. Olympia? Shawn says twice:

“Twice 2015-2016 I remember looking over and seen it look in his [Phil Heath’s] face both tears and it was like one of those where you think I got him.”

“He’s narrow! I think his ‘front double bicep’ is crap his front lat spread like a crap… I don’t think he’s ever done a side Chest… Abs and Thighs… Yes, he has probably one to the best back in the history of bodybuilding… but there are 7 other poses!”

Check out the full interview above! 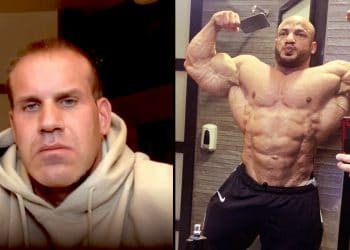