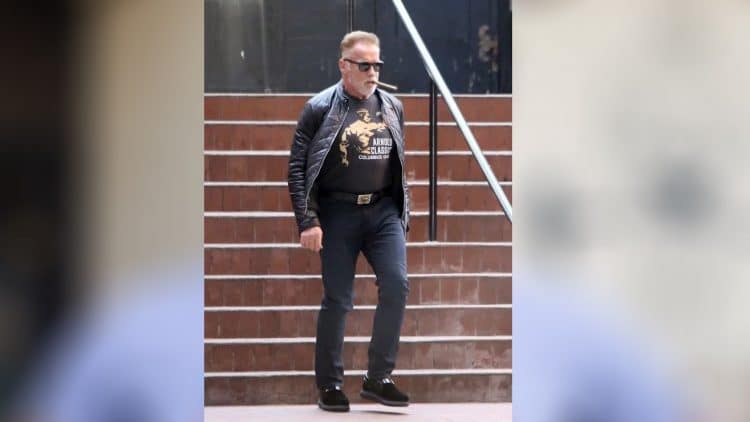 71-year-old bodybuilding legend Arnold Schwarzenegger may be the only man who can wear “himself” on a shirt and not look silly. He did wear a graphic on a shirt in his younger bodybuilding days so he’s no stranger to doing so.

However, we must mention though that his T-shirt is not just a picture of him. There were words on the shirt which said “Arnold Classic Columbus Ohio”. Now, this is actually an event named after Schwarzenegger and is part of the Arnold Sports Event Festivals which are composed of multiple annual competitions.

The Arnold Classic was created in 1989 after Schwarzenegger (Obviously) and is the biggest “Arnold Sports” competition and second largest bodybuilding competition in the world (It’s also a competition for Strongman sports) which takes place once a year in late February to early March in Columbus, Ohio.

We can’t really imagine why Schwarzenegger wouldn’t deserve to wear his face on his shirt because he has earned the right to do so.

But that’s not all he wore… (We must comment on his wardrobe as he takes a stroll through Los Angeles). It was interesting, to say the least, and as Schwarzenegger finished up filming for the Terminator reboot; we couldn’t blame him for remaining in character (If those were his intentions).

It was an outfit complete with jeans, boots, a leather jacket, shades and a cigar in mouth. It was actually entirely fitting for the superstar celebrity! 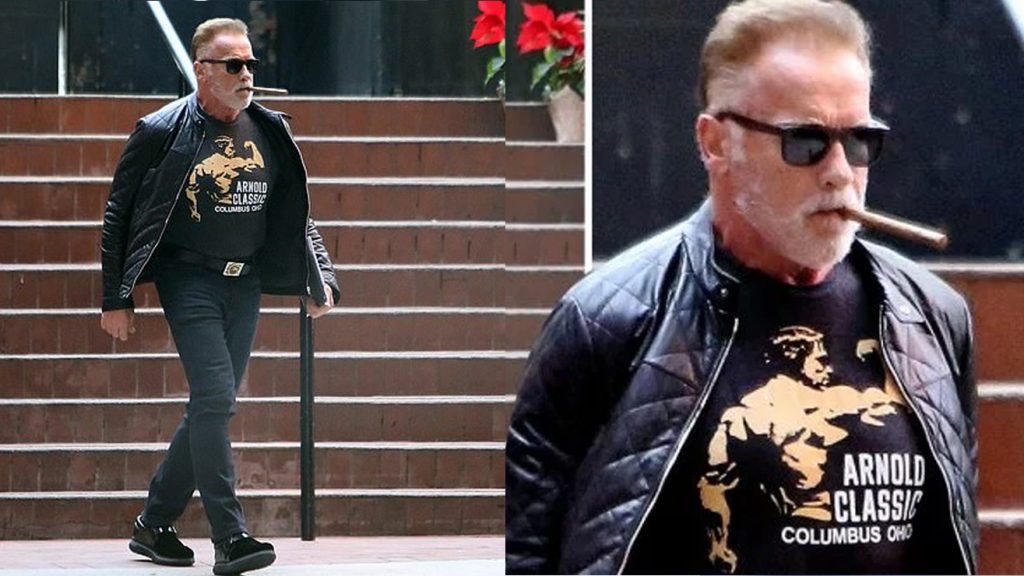 Everyone will get a chance to see him in his Terminator character as the reboot is set to release this year. It will also star Linda Hamilton who played Sarah Connor in the first two Terminator movies in 1984 and 1991.

27 years later and we get a sequel to Terminator 2: Judgement Day, directed by James Cameron.

Arnold Schwarzenegger was just doing his thing like usual but no doubt it’s awesome to see him walking around in such Terminator-like fashion!

Besides Schwarzenegger looking cool in his get up for his casual walk through L.A., he was in Sacramento on Monday for the Inauguration of Governor Gavin Newsom; joining up with former California Governors Gray Davis and Jerry Brown for the event.

Arnold Schwarzenegger served as Governor of California himself, from 2003 to 2011.

His last appearance was where he spoke at the UN Climate Change Conference last year, which took place in Katowice Poland.

Schwarzenegger said he wished he could have used his role as the Terminator to end fossil fuels.

“I’d like to be a terminator in real life, and be able to travel back in time and to stop all fossil fuels when they were discovered. Just imagine! The biggest evil is fossil fuels”.

He’s always trying to better the world and have a large influence with everything he does. Arnold Schwarzenegger may truly be the closest thing we have to a real Terminator because he just never seems to slow down!

Be sure to watch the watch the Terminator sequel when it releases this year.