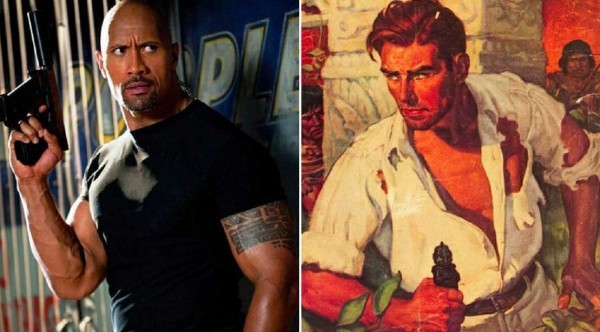 After releasing a first look at the upcoming “Fast 8” movie, Dwayne “The Rock” Johnson has even a lot more news reports for us: He’ll be actually starring in “Iron Man 3,” director Shane Black’s adaptation of “Doc Savage” from Sony Pictures.

If anyone not familiar with “The Man of Bronze,” also referred to as “the world’s first superhero,” Johnson helpfully clued in the clueless on Instagram.

The wrestler-turned-actor, who features already got his share of heroic roles in the Fast and Furious sequence, and the upcoming Baywatch reboot, announced recently on his Facebook page that he is teaming up with Iron Man 3 director Shane Black to play the comic book character, Doc Savage. The post included a picture of him, Black, producer Hiram Garcia, and writers Anthony Bagarozzi and Chuck Mondry.

In his update, The Rock thanked Black and his crew for allowing him to play the role, and enthusiastically stated, “Here’s the # 1 reason I’m excited to become Doc Savage. HE ‘S A F * CKING HILARIOUS WEIRDO! Can’t wait to sink my teeth into this one of a kind character.”

EXCLUSIVE FIRST LOOK: #HOBBS #F8 When you strip a man of all he has. All that’s important to him. You force him to return to his roots.. and sometimes that’s a very dangerous and twisted place. If I was going to return for another FAST & FURIOUS I wanted to come in and disrupt the franchise in a cool way that got fans fired up and their blood pumping to see a new version of Hobbs and his “Daddy’s gotta go to work” mentality and set the table in a cool way for where the character goes in the future. Maybe it’s a spinoff movie. Maybe it’s more #FF movies. Or hell maybe Hobbs just gets on his motorcycle and rides off into the sunset never to be seen again. Either way, I’ve had a solid first week of shooting, good to be back with the ohana, good to work again w/ my bud and director F. Gary Gray and our home studio of UNIVERSAL, as always have been the best partners to me and my #SevenBucksProds team. Most importantly… you guys around the world will really dig this new version of the role, ’cause as we always say, disrupters dent the universe. #Hobbs #TwistedRoots #1Disrupter #1Savage #F8

The casting came right on time. Most stars have to beef up to play hero roles, but Johnson already sized up for his role in the latest Fast and Furious film. The packed on 22 pounds to play Agent Luke Hobbs in the 8th installment of the franchise. Which will make him one convincing “Man of Bronze.”