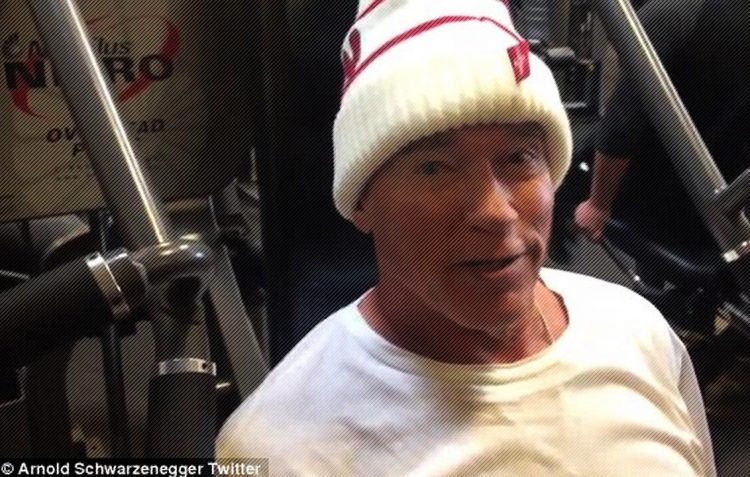 Arnold Schwarzenegger Pumping Iron to Gets in Shape for Christmas

Not even Christmas can come between the ‘The Terminator’ and his gym sessions.

On early Saturday morning on the 24th, Arnold Schwarzenegger posted a video of himself pumping iron at a gym, wearing a festive white-and-red beanie.

Arnold at 69 still ripped and exercise regularly, showed his toned biceps in the clip before dropping some words of advice for his fans: ‘Merry Christmas, I hope you’re working out to celebrate Christ’s birth.’

He delivered the inspirational statement with a knowing smirk. ‘Merry Christmas everybody (sic). I wish all of you a holiday season so fantastic it pumps you up for 2017.’

Merry Christmas everybody. I wish all of you a holiday season so fantastic it pumps you up for 2017. pic.twitter.com/N365sNjAQU

The father of five – four from estranged wife Maria Shriver and one from former lover Mildred Patricia – has said in an interview for February’s Cigar Aficionado that his day ‘can not start without doing something physically.’

Schwarzenegger: ‘I work out at night before bed – cardio, weight training. I want to stay in shape as long as I can.’

And if the holidays aren’t an excuse for the former professional bodybuilder to take a break, perhaps a leg injury would be?

The former Governor of California has been wearing a supportive leg cast for the past couple of weeks due to a stress fracture earlier this month.

Speaking on Live With Kelly a week earlier, the Hollywood legend revealed: ‘It could be from too much skiing or too much squatting … but who cares? It’s something that I’ve done too much of. ‘They say I have to wear this for a few weeks,’ he lamented, ‘but I’m going to replace it very quickly with ski boots.’

The health fanatic will next host the new season of The Celebrity Apprentice.