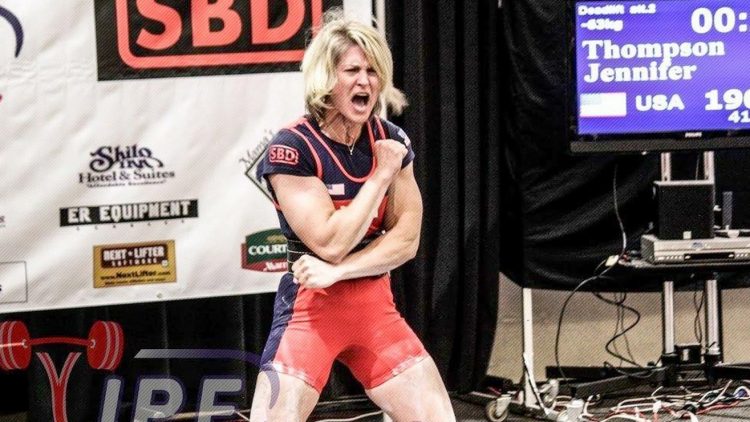 We love a good bench press and if you are reading this, we guess you do, too. When you think of a 132lb math teacher you are probably picturing scrawny, pocket protector wearing, geek. Well apparently our education system has changed drastically because not only is Jennifer Thompson good with numbers, she’s also good at pushing them too.

Jennifer Thompson, a female powerlifter who recently visited the locker room of Liberty University’s football team and showed them all up by crushing her personal record and benching 325 pounds like it was nothing.

Thompson, 5’5″, 43-year-old competes in the 138-pound weight class, bested her previous bench press record by 8 pounds without barely breaking a sweat. For reference, the average college football linebacker weighs about 300 pounds—and Thompson muscled that over her chest. The college football players who witnessed the feat responded with a rousing applause, and rightfully so, considering she could bench press nearly every single one of the team’s members. Check out the following video:

Thompson credits her success to a eat, sleep, lift mindset and states her crowning achievement as breaking the wilks highest co-efficient record by benching 300 lbs at 131 bodyweights, phenomenal.

“One of my life’s proudest moment was when I was able to bench press 325 lbs. with just a 132 lb. body weight. I have been in practice for this for years and it was perhaps the Highest Wilks Co-Efficient in History for Men or Women. I did it at the Arnold Classic and this is a phenomenal event. The entire crowd and my family were watching me and it still gives me goosebumps whenever I think about it.”

And holding 515 pounds over her chest for 10 seconds:

When Thompson isn’t competing she’s busy being a mom and teaching high school mathematics, but don’t let that fool you, this 43-year-old lifter has no thoughts of slowing down.

So, was that impressive? Can you compete with this math teacher and bench press 325 pounds? What your best bench was?

WATCH: Get Lethal Lats With Terry Crews’ Cobra Back Workout