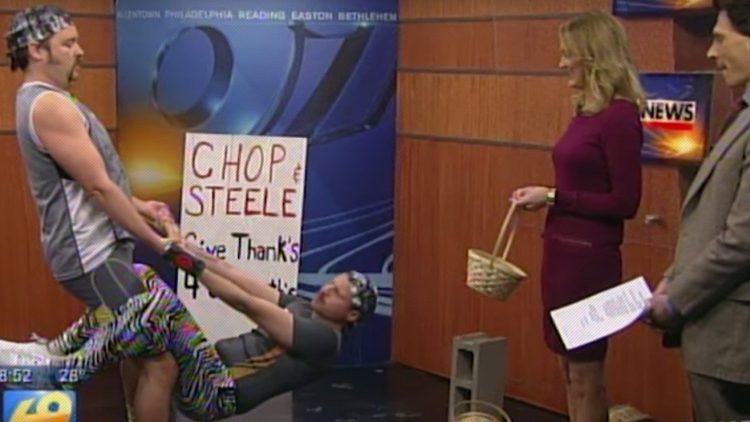 Local morning news shows have a lot of air to fill each day. So when a pair claiming to be an inspirational strongman duo blasted out a press release—citing a nonexistent tour and an America’s Got Talent appearance, and offering no video or documentation—they were immediately booked by seven different shows across the country.

Pranksters Chop (Joe Pickett) and Steele (Nick Prueher) are actually hosts on thefoundfootagefestival.com, which is home to funny and unusual clips.

Chop and Steele eventually appeared on three shows, in Eau Claire, Wisc., Bismarck, N.D., and Allentown, Penn., before canceling their other appearances due to being “stressed out.” Those three appearances were enough for some awe-inspiring demonstrations of their prowess. Like:

Chopping tiny sticks they found in the parking lot!

Their segment is based solely around working out with things in or around your house, which alone is a decent concept, but their execution was hilariously terrible.

Check it out the video:

What pushes this video into classic territory are lines from Chop like, “You have to let life bounce off of you.” before he allows Steele to throw twigs at his bare back.

Even fake strong manning is hard – Pickett broke a finger during their tennis racket joust. But he kept pushing through the pain. Truly inspirational.

Pickett and Prueher say none of the newscasters were upset about their appearances—or at least kept their reservations to themselves. But one station did email the day after the broadcast, asking for Chop and Steele’s credentials.

Schwarzenegger Slams Trump: Your Ratings are in the Toilet