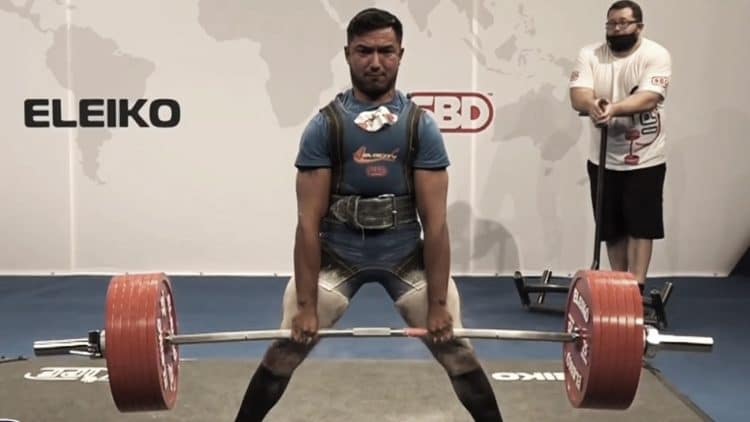 The 2021 International Powerlifting Federation (IPF) World Open Championship is underway in Stavanger, Norway. Starting on Nov. 8th, the six-day event will conclude on Nov. 13th. However, it looks like many records will be broken by the time competition is over. Competing in the 74kg (163lbs) weight class, American powerlifter Alexis Maher scored a new IPF equipped deadlift world record of 329kg (729.3lbs).

Maher used the hook grip in a sumo stance to lift the barbell off the ground. He achieved the feat wearing a single-ply suit and a lifting belt. There was no visible lifter’s grind and the 25-year-old led the barbell to a smooth lockout before returning it to the ground.

The previous IPF world record for equipped deadlift in 74kg weight class belonged to Norwegian powerlifter Kjell Egil Bakkelund. He executed a 328.5kg (724.2lbs) equipped deadlift at the 2018 IPF Open World Championship and won the Bronze medal totaling 868kg (1914.7lbs) in the 74kg weight class. Alexis Maher outdid Bakkelund by a narrow 0.5kg (1.1lbs) at the 2021 IPF World Open Championship. However, the 329kg (729.3lbs) lift was nearly 4.5 times his bodyweight. However, Alexis Maher’s record-breaking deadlift is by no means his heaviest.

According to USAPL’s lifting database, Maher executed a 331kg (730lbs) deadlift at the 2021 USAPL Equipped Nationals. Lifting a total of 808.5kg (lbs), Alexis Maher won the gold medal at the event.

However, Alexis Maher is yet to reach the benchmark he set for himself during the collegiate competition days. Competing for the 2017 Texas Open and Collegiate Cup, Alexis Maher set the personal record of 342.5kg (lbs) equipped deadlift en route to a silver medal win. However, he competed in the 83kg (183lbs) weight class at the event.

2021 (IPF) World Open Championship is still underway. It will be interesting to see how many records will be made when the event wraps up on 13th November.

Sumo Squat vs. Regular Squat – Which One Should You Do?