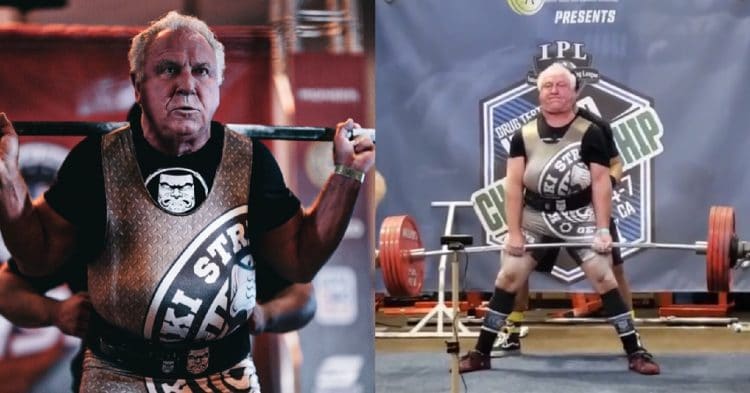 It has been proven over and over again, that no matter how old you are, it is possible to keep getting stronger with a ton of hard work. There is perhaps no better example of this than Rudy Kadlub, who is continuing to set world records, well into his seventies.

While Kadlub is primarily known for being the co-owner of Kabuki Strength, he has been changing his perception in a big way recently. Of course, that is completely due to the fact that he has been putting together some insane performances in the powerlifting world, especially for his age, including setting and breaking multiple world records.

Rudy was back at it again recently, when he decided to compete at the 2021 IPL Drug Tested World Championships, where he competed in the 100kg Masters Division. As he showed with a post to his Instagram, he swept the board in terms of world records, breaking his own records for squat, bench, deadlift, and total, all of which he set earlier this year.

Here is a breakdown of Rudy Kadlub’ lifts:

“Incredibly happy with the results from this past weekend’s IPL Drug-Tested World’s in Costa Mesa—hit a 451 squat, a 314 bench, and 512 deadlift—all world records. Additionally, I was honored to take home the Masters Best Lifter Award. This weekend I hit my highest raw total ever, and I was proud to do it alongside other competitors from Team @kabukistrength,” Kadlub wrote, reflecting on his performance.

“This prep had some bumps—from a fender bender that challenged my training for several weeks to a jam-packed business schedule, we still got it done, and we’re still getting stronger.⁣”

Rudy Kadlub Broke His Own Records

This was an incredibly impressive performance from Rudy Kadlub, and he was more than deserving of the Master’s Best Lifter award that he received at the end of it. He not only scored four records, but he was able to achieve the highest raw total of his career, and break his own records that he set, just four months earlier at the USPA Drug Tested Nationals in July.

The squat saw him make a gain of 21lb, while he added 6lb to the bench press, and 11lb to the deadlift. In the end, this means that he was able to add 38lb to his total, marking the biggest raw total that he has ever received.

There is no denying that, at 72 years old, Rudy Kadlub has a level of strength and longevity that defies expectations. It is crazy to see how much he is able to still consistently improve, and is a testament to how hard he is working.