Amanda Lawrence crushes three unofficial world records, with a huge squat, deadlift, and total in first meet in over a year 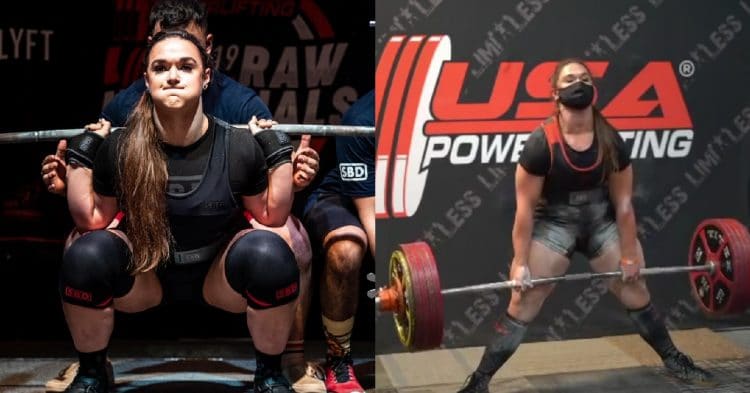 It has been a while since Amanda Lawrence had stepped foot on a platform to compete. Yet she clearly made up for lost time with one of the most impressive performances ever seen from a female lifter.

There are few powerlifters who have been as impressive as Lawrence over the last few years. Even though she has not competed since the 2019 RAW Nationals, she is still regarded as one of the best lifters in the 83.4kg weight class. She has enough world records and championship wins to back up these sentiments.

It had been over a year since the last time Amanda Lawrence competed, but she has been spending this time working hard in the gym. She showed off the fruits of this labor recently when she made her long-awaited return to the powerlifting platform. Taking part in the USAPL Gainsgiving meet, and competing at 83.7kg bodyweight, she hit three new American and unofficial world records, which she shared on Instagram. Among these was the heaviest total out of any IPF affiliated female powerlifter, at a whopping 1424.2lb.

It’s been over a year since I last stepped on the platform, so needless to say the expectation was set high, but we went out there and did what we had to do and couldn’t be more happy with the results! This year has brought about many challenges, but we kept our heads down and continued the work no matter what was thrown our way. In doing, that I managed to go 9/9 my first time ever and put out the best meet of my life with an overall 33 kg / 72.8 lbs meet PR!

This was an unbelievably incredible performance from Lawrence, especially given her time away. This meet was not an IPF sanctioned event which is why the records are not official, but it was an awe inspiring showing nonetheless. There was no signs of being rusty, which seems to suggest that her next meet will be even better.

Just because Amanda Lawrence had been away from competition does not mean that she stopped making gains. The world record squat was foreshadowed a bit in the lead-up to this meet. Here she is in training, just a few days before competing, where she did a strong 529lb triple, which was just 35lb short of the unofficial record she scored.

It was good to see Amanda Lawrence back in action after taking some time away. It is unclear what her plans are for the rest of the year, but it seems likely that her sophomore appearance at an IPF meet will see her solidify these records in the books.

Build Your Program: How to Design the Perfect Training Plan