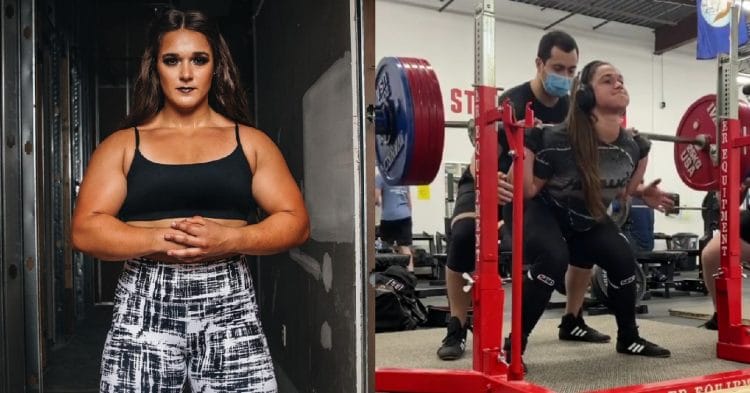 Powerlifting phenom Amanda Lawrence is preparing for her next competition. While still over a month out from this meet, she is already hitting some personal records in the training, and looking like a beast in doing so.

It did not take Amanda long to establish herself as one of the most fearsome competitiors in the 84kg weight class. In just a few short years, the 23-year old has put up some insane numbers en route to wins at the RAW Nationals, IPF World Championships, and many other contests. Although she has not competed in about a year, it is not because she is being lazy. She has still be in the gym, regularly updating fans on her growth and progress in the off season.

Now Amanda Lawrence is gearing up for a competition in about a month and a half. She has been grinding away in the gym to prepare for this, and the results have been evident. The most recent training update to her Instagram sees her crushing an enormous 587.7lb (262.5kg) squat, landing a new personal record in the process.

Over the last several months, Amanda has been working to try reaching the benchmark of a 600lb squat, something she has yet to achieve. It is unclear whether or not she plans to go for this at her next contest. However if she does choose to, which seems pretty likely, she has a good chance of achieving it. Of course she would have to carefully plan for her to peak at the contest, but if she continues improving between now and then, 22lb is not all that much to add to her squat total.

In her last few training updates, it has been clear that Lawrence is gearing up for something big. In the last squat session she shared, she was able to take 565lb for a ride and made it look like a warm up. It is worth noting that the jump between this squat, and the one above, is the same amount of weight that she would need to increase again in six weeks, to reach her 600lb goal.

If Amanda Lawrence can not reach her goal of a 600lb squat at this meet, it would not because of a lack of trying. She has been putting the work in, and reaching new highs in her skills. No matter what happens in six weeks, there is no question this milestone will be hers eventually.