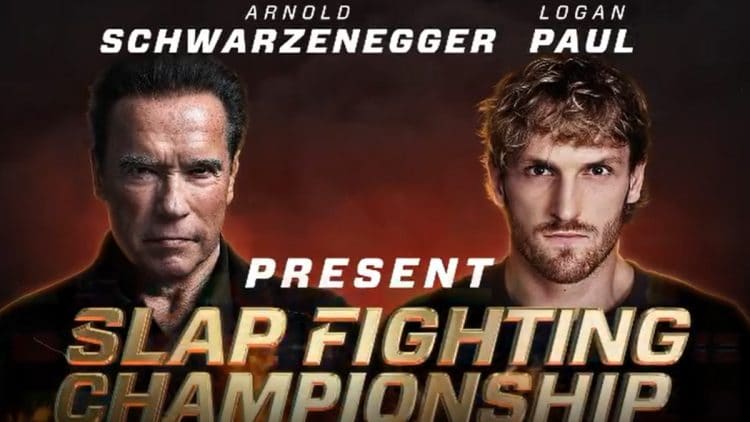 The 2022 Arnold Sports Festival will offer entertainment in the form of ‘Slap Fighting Championship’ competition. The unusual and fast-growing combat sport first became popular in the Russian Federation and is now making inroads into the American sports entertainment market. During his recent visit to the Impaulsive podcast hosted by YouTuber-turned-professional boxer Logan Paul, the former governor of California, 7x Mr. Olympia champion and Hollywood action hero Arnold Schwarzenegger made the announcement of its inclusion in the 2022 Arnold Sports Festival.

The 2022 Arnold Sports Festival will take place from March 3rd to 6th in Columbus, Ohio. The festival will encompass the iconic Arnold Classic bodybuilding competition along with many other events. Logan Paul and Arnold Schwarzenegger will present the inaugural slap competition to the fans on the last day of the Arnold Sports Festival. Logan Paul and Arnold made the announcement and said:

“We are doing the slap fest together.” Arnold Said. “okay this is gonna be big time, because I’ve never seen this live.”

“Okay. Breaking! Here is the Alpha. Arnold and I are presenting the slap fighting championship in Columbus, Ohio on March 6th.”

“We’re doing it at the Arnold Classic, your bodybuilding event. I think on the last day… Him (Arnold) and I are presenting.” Paul said

The executive director of Arnold Schwarzenegger Sports Festival, Brian Powers said, representatives of a Polish slap fighting organization reached out to them a few months ago in the hope to collaborate with bodybuilding legend Arnold. 7x Mr. Olympia champion checked into the detail and comes up with the idea to co-promote this event with Logan paul.

Logan Paul further stated that he was supposed to participate in a slapping competition in Russia. However, after slapping a person for one of his YouTube videos, Logan Paul realized the seriousness and the potential of damage with slap competitions. Therefore he chose to cancel any such plans.

While explaining the reason for incorporating slap competition in the 2022 Arnold Classic, Arnold Schwarzenegger explained:

“Why this is the perfect event is because Arnold Classic is a sports and fitness festival. We never choose and kind of have an attitude about what the sport is. So people ask me, “Slap competition? Why would you have that?” I said I got the same question about when we had an axe throwing competition…”

“We have everything, we have sports after sports after sports. We don’t judge anything, we are only there to have people be able to compete. If people watch and be entertained and be inspired, that’s what it is. I know we’re gonna have a great time watching the slap competition as long as we get slapped!”

Arnold Schwarzenegger is confident that people would love everything about the slap competition. It will be interesting to see how the audiences respond to this unusual sport.

Logan Paul stated that his father took him to the Arnold Classic when he was 11 years old and was blown away after watching Arnold in person. Paul drew attention to the remarkable circle of life as just over a decade later, he will be presenting at the Arnold Classic with none other than Arnold himself.

Reacting to this, Arnold Schwarzenegger gave life-changing advice to those watching the podcast.

“This is the important thing. To inspire people and to let them know anything is possible. I’m talking about not just the people in Hollywood…”

“If the poorest of poorest people can watch this and if they can see ordinary people can make it… I want to inspire people there and say, “you can do it. Just have a vision have the will and just chase the vision…”

Arnold continued that he came from a small village in Austria and those around him doubted him. Logan Paul stated that Arnold’s stature today is a testimony to what can be achieved if one chooses to chase their vision.

When Logan Paul asked Arnold what keeps him going at this stage of his life, Arnold Schwarzenegger stated that training is an integral part of his life and he has to train to feel good. Arnie concluded:

“It’s tough enough as it is when you get older. You have to hold on as much as you can and you have to still watch what you eat and all of this kind of things. It’s so good.”

Courtesy of Impaulsive YouTube channel, you can watch the full podcast episode here:

Escalating Density Training – A Different Way to Work Out