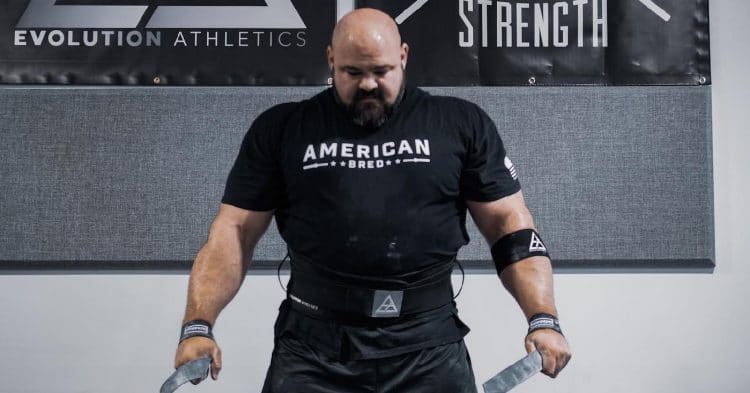 It is not a secret that Brian Shaw is one of the nicest people in the world. However he took this kindness to a new level when he assisted a stranger who had gotten into a pretty bad car accident.

Although it is pretty clear that Brian’s best days of a strongman athlete are behind him, he is still one of the best to ever do it. Over the years he displayed an ultra high level of skill that propelled him to multiple World’s Strongest Man victories, as well as several other achievements. He is, without a doubt, one of the strongest men in history.

Apparently Brian Shaw got to put this strength to good use recently, as he told on his Instagram page. As he tells it, he and his wife were on their way out of town, when they came upon a head-on collision between two vehicles. Naturally, after figuring out what was going on, Brian got out of his vehicle to see what he could do to help.

“It was bad, it was very very bad. It was a high speed head-on collision that you couldn’t even tell what kind of cars both drivers were driving. Going up to the accident I was told that the driver of the car that was closest to us was talking, responsive, and I got up to his car and asked him if he was okay. But the way the door was, it was jammed back and he was trapped. He was trapped inside the car and couldn’t get out. He asked me to get him out, so my first response was ‘I’m going to rip this door off of this guy’s car and get him out of there because I could see that he was bleeding and jammed in there, and I wanted to do everything that I could.

“So I grabbed the door, and started bending it in half. I was able to break the window and pull the door in half. Then the woman who was on the phone with 9-1-1, because there was nobody there as far as a first responder at that point, told me that they recommended to stop, just in case he had some sort of an injury. So I just bent the door in half, pulled the airbag up so this guy could breathe, and I was talking to him. He actually asked me to call his fiancee to let her know what had happened.

“It was a tough spot to be in overall. The whole situation was something that you don’t want to encounter in life. It was tough, he was banged up. Thankfully he was talking. The other driver, unfortunately I don’t think personally, made it. I don’t think, when they pulled him out of the other car, I’m not sure that he was alive anymore, which is unfortunate.”

As incredible as this was, Brian Shaw wanted to make it clear that he was not after any praise. Instead he just wants to lead by example, and show people the right thing to do. He felt that he had skills that may be able to help, and wanted to be sure to use them.

“There are times in life when you get confronted with a situation, or put in a situation where you have choices. You have ways you can react. For us, both my wife and I were ready get out of town. It would have been super easy and simple to just throw the truck in reverse, and just flip around and forget that we had even come up on that accident. That wasn’t the right thing to do. The right thing to do was to get out and see if my strength and power, and what my wife was able to do, if we could help. There were a lot of good people that hopped out of their cars, that didn’t know those two drivers, that just wanted to make a difference. They just wanted to do something good, and see if they could help.”

Brian Shaw concludes by saying that things are complicated in the world right now, but that does not mean that you can not be positive. If you are ever presented with a similar situation, maybe you will make the same choices. This was an incredibly kind act by an incredibly kind man.