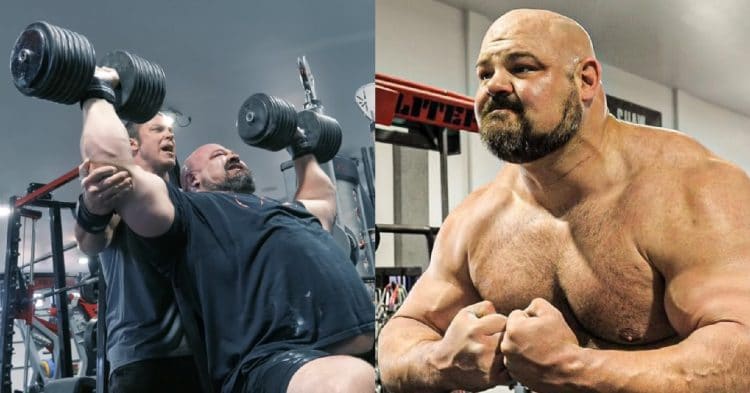 Over the years, Brian Shaw has trimmed down a lot, and has looked pretty slim. However he showed recently that he just because he lost weight, does not mean he has lost muscle.

When Shaw underwent his tremendous weight loss, there was some concern that he had lost some of his ability on the strongman field. These concerns grew when he seemingly had a decline in his last few contests. The multiple-time WSM champ was not even able to earn an invitation for the 2020 Arnold Strongman Classic.

However Brian Shaw recently proved that he still has a solid amount of strength. He took to his YouTube channel to share his shoulder training session. Alongside his training partner, fellow strongman Tyler Stickle, he ran through a few sets of seated dumbbell presses, increasing the weight as he went. This culminated in a massive set of 150lb for six reps.

That was not an easy lift for Brian to perform, by any stretch. He very clearly needed help with his final two reps, but he still made it through them. Afterwards, he explained that he should have had Tyler help him get the dumbbells up, rather than kick them up, because they messed up his energy. Moreover he says he plans to focus on doing better next week.

This was not the only noteworthy thing that happened in this video. After doing a bench press with chains, and some improvised inverted skull crushers, the two began flexing in front of the camera. Stickle, who did some bodybuilding in his youth, asked Shaw when he would be stepping on the bodybuilding stage.

“I don’t know, I’m a few weeks out,” Shaw joked. “Just need a spray tan, and I’ll get a little dehydrated like Eddie Hall and I’ll be good to go.”

Obviously Brian Shaw is not very serious about his comments on bodybuilding. Nevertheless it makes you wonder exactly how he would do, with some actual prep.

Eddie Hall: Prove You Are The Strongest Athlete On Earth, And You Can Win $10,000