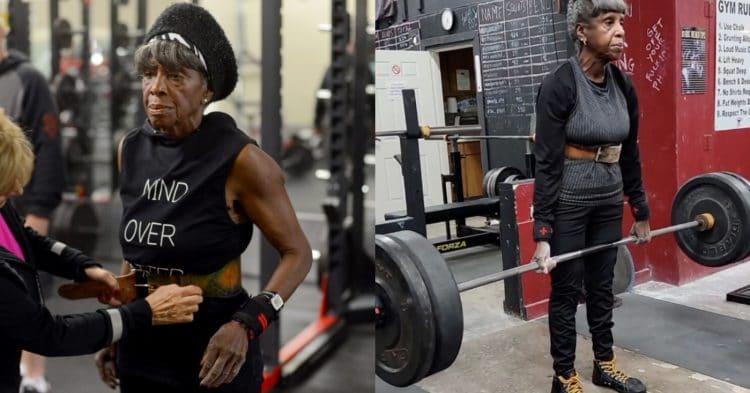 Most 84 year olds are taking things easy, trying to avoid lifting anything heavy. Unless of course, that 84 year old is Carrie Reese, who continues to prove that she is capable of doing much more than her age suggests.

Reese has made a name for herself, being dubbed the “Powerlifting Grandma” after getting started in the sport at age 74. Now, a decade later she has become infamous for her age defying feats of strength on the barbell.

She was back at it again recently, this time hitting a solid deadlift in the training room. A post to her gym, Old Skool Iron’s Instagram sees the 84 year old pulling a strong 195lb deadlift, during a 5am training session, and looking like she could have easily done heavier weight.

“Here she is again, even talking a little smack at 5am and 84yr Carrie Reece (powerlifting grandma) smoking 195lbs with plenty left in the tank,” they wrote, praising Reese.

It is not uncommon that we see people get into powerlifting late in their lives like this, but Carrie seems to be a special case. While she may not be the oldest powerlifter in the world, she is a super inspirational figure for those who are looking for a reason to keep going to the gym.

What makes this so impressive, is that Carrie Reese is still competing, and even appears to be getting better. This deadlift was just 22lb shy of her personal best in competition of 217lb, and she pulled the weight in a way that made it seem closer to a warm up, than a pull that was this close to her PR.

Carrie makes it clear that the gym is a big part of her life, and she is no stranger to these types of early morning training sessions. Here she can be seen doing a 185lb deadlift, just a few days earlier, again hitting the gym at 5am.

Carrie Reese has competed as recently as last month, crushing the Masters 80+ division, at a bodyweight of 125.4lb, at the USPA Surf City Open on July 10th. She has no intentions on slowing down either, making it clear that she plans to keep competing until the day she dies.

Powerlifting is a sport that welcomes everyone, regardless of age, gender, or bodyweight. Carrie is just the latest example of how anybody can move some weight, if they are dedicated enough to the gym and love the sport like she does.