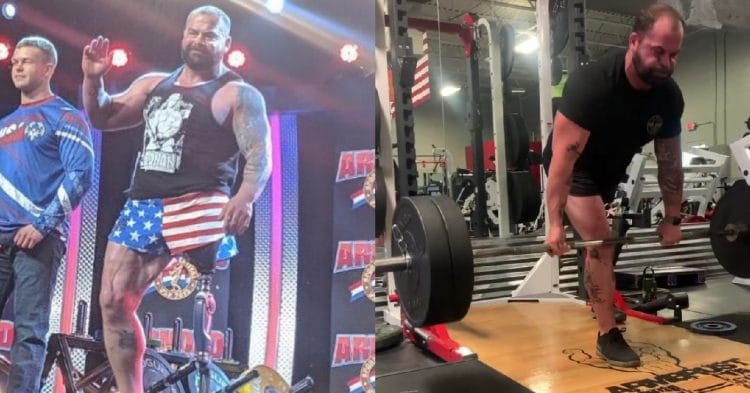 Strength sports are known for their inclusiveness and ability to bring together people from all different backgrounds and walks of life. Perhaps the best possible example of this comes from Derick Carver.

36-year old Derick Carver can teach anybody a thing or two about overcome adversity. While serving as a Lieutenant in the U.S. Army, Carver and his unit were set to work on reopening a school in Afghanistan that had been the target of Taliban IEDs. While attempting to clear the area, the Taliban launched an attack that would change Derick’s life forever.

This attack, which saw assailants using rockets and homemade explosives. In the battle, Carver got severely injured, losing most of his right thigh, damaging his fingers, and the complete loss of his left leg. Not only that, but this caused him to suffer from PTSD, an issue he still struggles with to this day.

Nowadays, Derick Carver has been able to find a newfound purpose in life, using fitness and powerlifting as a motivator, and even being honored for his efforts at the Arnold Classic. This inspirational story was on display recently, with some posts to his Instagram. Here you can see the veteran doing more than just the typical upper body exercises you may expect from someone who can only use one leg. Instead, he manages to do some decent sized deadlifts, both with a prosthetic and without.

“First day doing “heavy” deadlifts. I’ve been cleared to add weight and go off how my nub feels.
•
In the first video (no leg) I struggled with balance. My ankle isn’t as strong as it was before. Surgery plus inconsistencies with gym and routine have added up. The bar felt light and seemed like it was accelerating off the floor.
Not 100% but a good start all things considered.
•
Second video is with my leg on. It caught me by surprise because the bar felt heavier and seemed off in my hands.
You can tell I’m favoring my right leg lifting and setting down the weight. I kept the weight light to focus on form and technique. It took me decades to build up to where I was. Step by step.
•
If you lift it, the gains will come. Conquer your fear and rule your life.”

In the clip without his prosthetic, Carver looked shaky at first. However he found his balance by the second, and pulled two more easily. Then with the prosthetic on, his form was only made better.

It has been a decade since Derick Carver lost his leg, but he has never lost his motivation. This massive accomplishment from him, in finally being able to pull some decent weight, and it is a product of his never ending determination. His story is undeniably inspirational, and it is only looking up from here.