Giants Live 2019 event was awesome on paper and from the looks of the results, it was awesome in execution as well. The selling point for this event were two things. The mythical 500kg deadlift and the Hercules Hold showdown between the Strongman legends Magnus ver Magnusson and Bill Kazmaier.

The deadlift event was looking stacked with names who could take out Eddie’s record. From powerlifters to deadlifts specialists all the way to the “standard” Strongmen. However, the injury bug came crashing down on the event and out of the competition pulled out Larry Wheels, Brian Shaw and Benni Magnusson.  Despite the sucky news, the event happened and it was awesome!

The deadlift event saw Rob Kearney aka “world’s strongest gay” surprise everyone and pull an impressive 440kg deadlift. The surprises didn’t end there since Rauno Heinla matched Jerry Pritchet on the max deadlift and lifted an impressive 455kg. Jerry tried his luck at 470kg but couldn’t get it off the ground.

Declaring the winner of the event-Rauno Heinla! Other guys, as expected, didn’t go balls out on the deadlift since they were saving themselves for the rest of the show.  The current World’s Strongest Man, Martins Licis, was looking at the long run and didn’t go past the 420 kg in the deadlift.

This is where the Polish powerhouse Mateusz Kieliszkowski showed he means business. He completed the farmers walk in 18.78 seconds. Let that sink in for a bit….it took me longer to write out type out this paragraph praising his insane strength, then it took him to finish the entire event.

Just look at the best, none insane, time to finish this event-24.75 seconds by Mikhail “the bleeding Russian” Shilvlyakov. 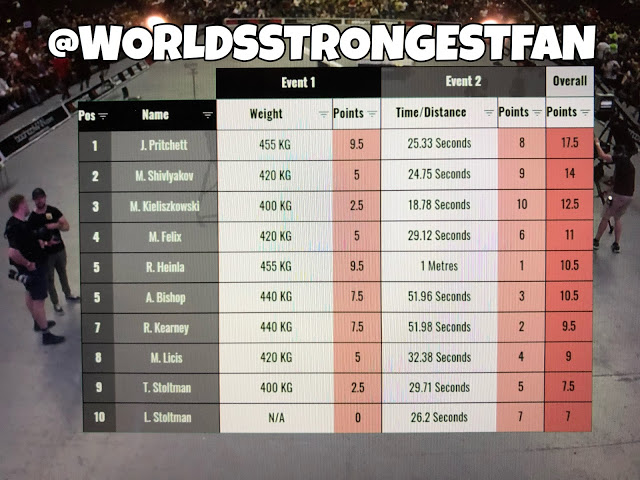 I got 3 words for you; Mateusz fucking Kieliszkowski. He is the youngest Arnold Strongman Pro and one of the youngest, if not the youngest guy to earn a top 3 spot at a WSM show.

He is 25 years old and is matching size monsters like Thor and Brian Shaw in both reps and weight when competing against them.

I write this not just because I’m trying to beef up my word count, I’m also writing all of this because he won this event with 13 reps. The eldest of the Stoltman brothers managed to come close to Mateusz with 12 reps, but still couldn’t beat the future champion.

He stood between the pillars got a good foot placement, dug deep and just stood there for 83 seconds.

After all the competitors got done competing for the second place in this event, out came Bil Kazmaeir and Magnus ver Magnusson and competed in a slightly alternated version of the Hercules hold to minimize the chance of injury.

Magnus proved that he’s still got that Viking power in his veins as he held on for the handles for close to a minute and a half! If that was competition weight(allegedly the adjustments to the equipment made the weight about 20kg lighter) he would have gotten Mark Felix’s world record!

All that from a guy that’s been retired longer than some of the guys competing have been alive! Bill Kazmaer tried to top the performance of his Viking rival, but he just couldn’t quite get the right footing of between the pillars and had to drop the weight with a painful grimace while holding his right shoulder after about a half a minute. 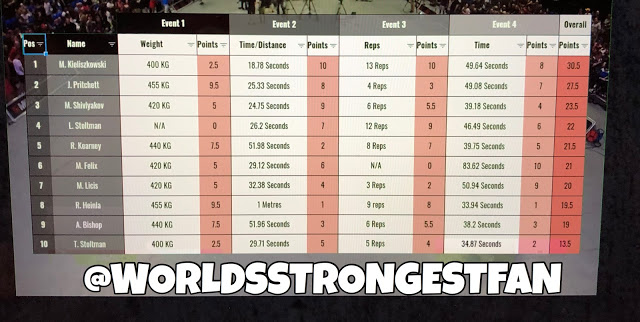 The fifth and final event was the atlas stones. This saw Martins Licis, the world’s strongest man, rack some much-needed points as he won the event in 20.27 seconds, earning him enough point to land him on the top 3 podium, right behind Jerry Pritchett and Mateusz Kieliszkowski 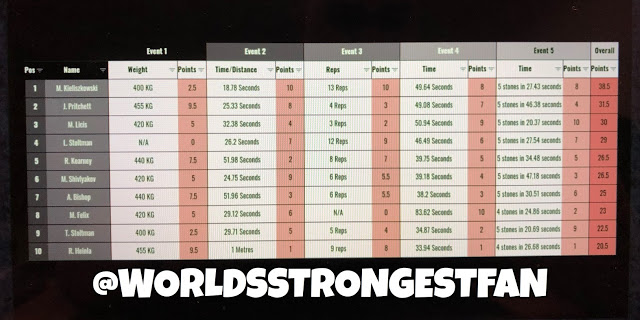