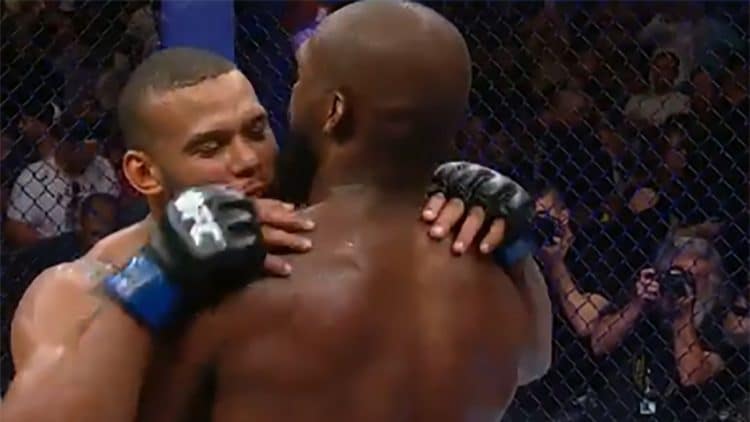 Herb Dean was the referee. Santos surprised Jon Jones in the first round with a great barrage of low kicks, and the champion nearly lost his balance early on. We’ve seen an awesome exchange in the first frame, but “Marreta” seemed more dominant and it was his round. Thiago also landed one very strong punch, but Jones wasn’t rocked.

Santos hurt his knee at the beginning of the second round, but he continued moving well. There were few great kicks on both sides, but it was an even round. The champ delivered an entertaining kick to end the round, but Thiago blocked it well.

Jones tried to finish his rival in the third frame, and attacked with a great flying knee. Yet, Thiago was ready, and ducked. Jones fell down, but the Brazilian let him get up. We’ve seen another outstanding shot trade two minutes before the end of this frame. Maybe the best round.

Fighters traded low kick for the most of the fourth round, but Santos was visibly hurt. His pace and movement slowed down. Jones missed with a spinning back-fist. The champ even kept his hands low to provoke Santos, but the Brazilian didn’t buy it. Despite an injury, Santos was constantly trying low kicks.

As soon as the fifth round kicked off, the Brazilian went for “all or nothing”. He was attacking with punches, and it seemed Jones was wobbled for a second. Santos caught Jones’ kick, and even fell down after an unsuccessful kick attempt. Luckily, he got up almost instantly. This was Santos’ round, but the referees obviously thought otherwise.

Ready to bring the 🔨⬇️.@TMarretaMMA gets his date with destiny NEXT at #UFC239! 🇧🇷

Will the madness continue!? #UFC239 pic.twitter.com/A36SZeo5N0

The champ is here! 🏆@JonnyBones puts his championship on the line at #UFC239 NEXT!

An exclamation point on our biggest night!@JonnyBones is making the walk now! #UFC239 pic.twitter.com/N9nNTdypCB

Giving the champ a lot to think about! 🇧🇷@TMarretaMMA not just here to take part at #UFC239!

How have you got it scored so far? 🤔

Jorge Masvidal squared off against the former ONE and Bellator champ Ben Askren in the main card of UFC 239...