The glute bridge is a valuable tool in your glute training arsenal.

Sure the glute bridge primarily targets the muscles of the butt which include the gluteus maximus, medius, and minimus. But that’s not all it’s good for even if it is just a simple bodyweight exercise.

You’ll also find that it’ll give your hamstrings, core, lower back, and posterior chain (backside of the body) a heck of a workout as well. And as a result, you’ll increase hip strength, prevent/improve lower back pain, and, of course, it sure doesn’t hurt to have a nice looking pair of buns!

So today, we’re going to show you how to do this exercise effectively, talk about the muscles involved, and even offer some superb variations…

First, let’s talk about how to perform the actual exercise…

Make sure to control the movement so that you feel the engagement of the muscles involved.

Do not push through your heels but rather make sure to perform the movement from your hips. Also, you only need to lift your hips until aligned with your torso and thighs. This is important for the safety of your back pain.

It’s a relatively simple movement but… make no mistake, it can get rather challenging after a certain number of reps depending on the individual. And since it is a bodyweight exercise, it’s best to perform a higher number of reps to get a good workout.

We briefly touched on the muscles which are engaged during the glute bridge. It’s a great butt exercise but your hip flexors, hamstrings, back, and even core are involved as well.

So, besides the muscle and strength-building side effects, this is a functional movement that involves the several aforementioned muscle groups.

The glutes are crucial for extension and external rotation of the thigh, and it plays a big role in keeping us upright. Well, when weak/underdeveloped (oftentimes caused by lots of sitting and inactivity), this can cause some lower back issues. So, it’s very important to train the muscles of the buttocks for optimal function.

The hip flexors consist of several different muscles which include the rectus femoris, iliacus, psoas, and iliocapsularis. And these muscles help with the function of the hip flexors which is to bring your torso and trunk together, bend your torso over your hips, plus rotation and adduction of the thighs.

But having weak hip flexors can result in lower back pain, bad knees, poor posture, and a lack of mobility.

Now, just like the glutes, sitting for too long can weaken the hips due to prolonged shortening of the muscle. So, if you find yourself having the issue of weak hip flexors then it’s time to start incorporating exercises to strengthen and lengthen this area for functional health.

The hamstrings are opposite the quadriceps which consist of three muscles (biceps femoris, semimembranosus, semitendinosus).

And its function is to extend the thighs and hips, flex the knee, and rotation of the tibia (shinbone). So, whether you’re walking, squatting, or just bending over, your hamstrings are a part of the process. 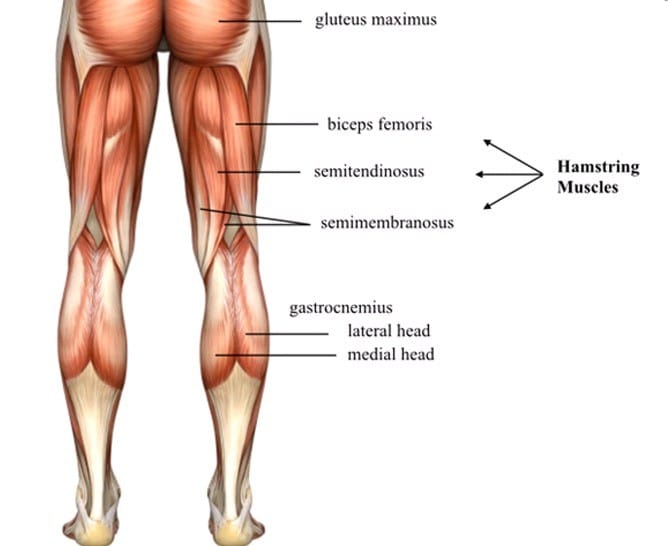 The back is composed of several different muscles (trapezius, erector spinae, latissimus dorsi, rhomboids). Each has its own function which includes movement of the shoulder and neck, plus the function of the vertebral column and that related to posture as well.

Due to the action of the glute bridge, it’s easy to see how the back muscles are involved.

The core muscles include the abs, obliques, internal muscles, and even lower back. These muscles support the stabilization of the spine and trunk while playing a big role in essentially every exercise.

So, it’s very important to keep the core engaged and tight for the safety of the back and to perform optimally.

Besides your typical two-legged glute bridge, there are a few variations which can provide even more of a challenge, therefore, contributing to progression and even more results.

This single-leg glute bridge is awesome and probably the most popular variations because your hips have to work even harder to power through each repetition and you still don’t need any equipment. So, the movement itself is still rather simple.

A similar variation of this would be to bend the non-working leg and tuck the same foot on top of the thigh of the working leg, instead of extending your leg out straight.

Also, you can lift the non-working leg straight up rather than a few feet off the ground to increase the difficulty.

Here’s a cool variation that will test your stability.

Glute Bridge on Your Toes

Instead of doing the glute bridge with feet flat on the floor, challenge yourself a little more by staying on your tiptoes the entire time.

To add more resistance to the basic glute bridge, hold a dumbbell or kettlebell on your hips.

The hip thrust is the absolute cream of the crop when talking about glute bridge variations. You can load up with a ton of weight and it’s an amazing strength-building and muscle-building exercise which also works all of the same functions of the glute bridge just to a greater extent.

To do the glute bridge:

You can do the glute bridge at home, the gym, on a train, in the grass… or anywhere else because you don’t need equipment (unless doing some of the weighted variations).

It’s a good exercise for building or even maintaining but it has its place in an exercise regime. So, we hope you learned a little something about it and do try the variations to see for yourself how challenging this exercise can really be.

It doesn't matter how hard your friendly neighborhood gym bro tries to convince you that he doesn't care about glute...

Let’s get one thing straight from the outset of this article – there is no such thing as a waist...

The 21 Best Bodyweight Exercises for Muscle Size and Strength

A lot of bodybuilders and experienced lifters are very quick to dismiss bodyweight exercises, believing that they’re not challenging enough...