Henry Cejudo Defeated Marlon Moraes Via Third-Round TKO After A Barrage Of Hammer-Fists And Elbows! 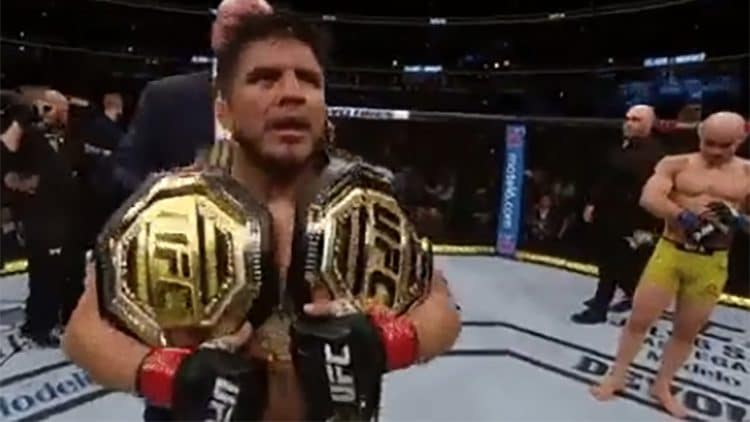 UFC 238 PPV (Pay-Per-View) event went down tonight (Saturday, June 8, 2019) from inside United Center in Chicago, Illinois. The current UFC Flyweight champion and Olympic gold medal owner Henry Cejudo squared off against BJJ black belt, Muay Thai black prajiad, and the former WSOF king Marlon Moraes in the main event of the evening. The two fought for the vacated Bantamweight belt. Marc Goddard was the third man in charge of this contest.

Marlon Moraes controlled the first round and used his reach advantage well. Cejudo was trying to punch him to the face, but Moraes’ movement was superb. He stuffed Henry’s single-leg takedown attempt and punished his opponent with many dangerous low kicks.

Henry Cejudo changed the strategy in the second frame, and it brought the result. Despite Marlon dropped him with a nasty low kick, Cejudo got up, went forward and slammed his foe with a stunning overhand right. It completely changed the outcome of the match.

Marlon even head kicked Henry, but the wrestling champion continued going forward. aT the end of the round, Cejudo shocked the world and punished Muay Thai black prajiad with knees to the head of the clinch. Wow!

Henry secured double under-hooks early on in the third. After an eye gauge, the ref restarted the contest, and Cejudo cracked his opponent open with uppercuts and knees.

After ending up in the dominant position, Cejudo started landing a brutal barrage of elbows and hammer-fists, and Marc Goddard was forced to wave off the contest.

Check out the highlight reel below.

The Olympic champ is putting in WORK on the ground. #UFC238 pic.twitter.com/N4bNMM8GR3

Henry Cejudo is a 2008 Olympic Gold medalist, the current UFC Flyweight Champion and if all goes according to plan...