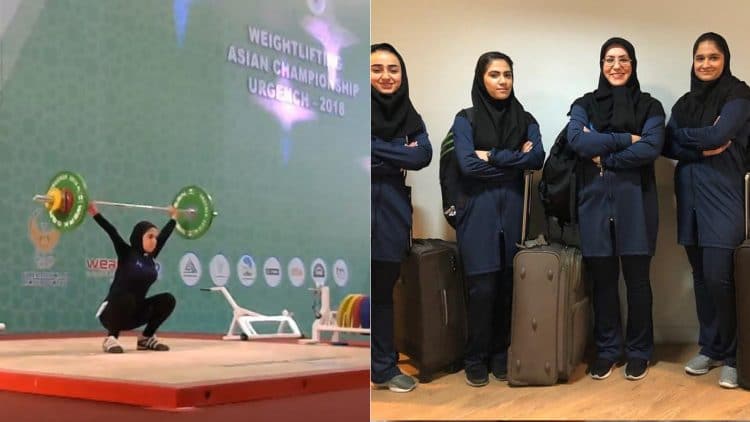 It’s a first…seven young Iranian female weightlifters will compete at the Asian Championships in China and they’ll be joined by ten men from Iran to represent their country from April 18th to the 20th.

This comes just around 30 years after women were globally accepted into the sport of weightlifting.

The Iranian president of the Iran Weightlifting Federation (IRIWF) expressed his pride for this senior female team when he told Inside the Games… “I am very happy, very proud – we have worked so hard with our female team over the past year.”

But despite his positive words about the women’s team, these seven women between 17 and 22 years of age still know their lack of experience will hurt them… “We know we cannot take medals in the Asian Championships, but in the future, we will be better.”

However, their goal is to compete in Tokyo next year which would only allow two men and women to compete from their country but they ultimately have their eyes set on winning a gold medal in Paris 2024 as Moradi explained… “We are very hopeful of a gold medal in 2024”.

Now, it seemed as these female competitors would never get a shot to shine in a big competition seeing as there was so much opposition but last year a men’s only event included an eight-year-old female who made headlines after a female weightlifting development program was implemented.

This opened up the possibilities for international female competition for this Iranian Senior team and although they’ve only had a year of training and education, they do have what it takes to be competitive even if they’re not top-tier athletes as of yet.

But this means big things for women’s involvement in weightlifting and is perhaps a stepping stone to something much bigger in the future.

Ursula Garza Papandrea, who’s the chair of the International Weightlifting Federation for the women’s commission said…

“This is an exciting development. I am really excited about the progress this indicates.”

”This is a meaningful step for women’s weightlifting in Iran that translates as a success for all women in weightlifting.”

Well, this is great news for the senior women’s weightlifting team in Iran and hopefully, the seven young women competing can represent their country by showing their best performances.

Train Your Obliques For A Killer Core