Iron Biby may not have competed at the World Log Lift Championship, but he proved he would have won with a 200kg lift 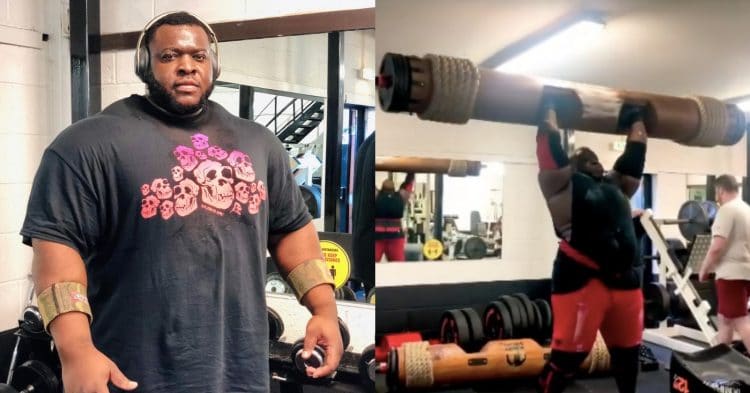 Strongman Iron Biby was sadly unable to compete in the World Log Press Championships, at the 2021 Europe’s Strongest Man. However just a few days after the contest, he was back in the gym, surpassing the scores of the athletes who were able to compete.

When it comes to the log press, Zydrunas Savickas currently holds the record at 228kg, set way back in 2005. However as the current axle press record holder, Biby seemed to be primed to break that record at the World Log Press Championships, held at the ESM, but was unfortunately unable to attend after a death in the family.

However he posted to Instagram just a few days after this contest, to show a preview of what might have happened if he was able to make it to the contest. Here he was seen hitting a 200kg press, which was heavier than anything that was done in England over the weekend.

“Blessed be back in Uk and get a 1st log training . Thank you all for all the supports . Been Down emotionally but time will heal 🙏🏾🙏🏾” Biby wrote.

It is easy to be amazed at this log press, simply by how big it is on the surface, especially when you consider how easy he made it look, making it seem like a warm-upa. What makes it more insane, is that of all the strongmen that competed at the World Log Lift Championships, Luke Stoltman and Graham Hicks had the best performance, and they barely lifted 195kg.

However what makes this showing from Iron Biby even more impressive, is the fact that this was not even a personal best for the West African strongman. In fact, just a few weeks earlier he was able to lift an astonishing 209kg in the gym, even though he was still recovering from a bicep injury, while he had his sights firmly set on taking out the world record, before he was unable to compete.

It seems that Iron Biby will be staying in the UK for a little bit longer, in hopes that he will be an opportunity to break this log lift world record, as a special guest for the next Giants Live show, which is set to take place on September 18th. If he does make it to this contest, and is able to break the record which has stood for a decade and a half, which seems quite possible, it will be incredible to see.