Iron Biby Overhead Presses Whopping 573lb Like It Is A Toy 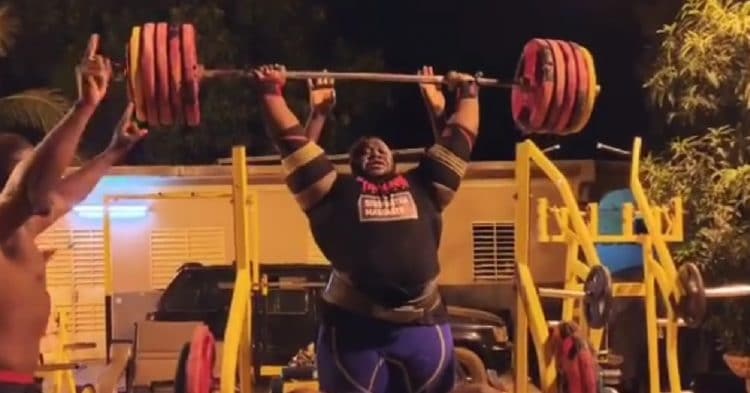 When it comes to the overhead press, few people are as skilled as Strongman Iron Biby. He put those skills on display again recently, with a massive performance.

28-year old Burkinabé strongman Cheick “Iron Biby” Sanou has made quite the impression over his years competing. Particularly, his overhead press skills have become notorious, with him earning a spot in the Guinness Book of World Records for most overhead presses of a person in one minute. Although this was only the beginning, as he followed this up with a big showing earlier this year.

Little did we know this was only the beginning for Iron Biby. Taking to his Instagram recently, he took to his barbell again, this time to do an even bigger press. The video he shared sees the 6’2, roughly 375lb strongman overhead pressing an enormous 573lb. (post edited for clarity)

“573lbs/260kg standing press. Thanks to all my fans and my team for all the support!! Will definitely push more harder next time”

As incredible as this overhead press was, Biby has not forgotten about his bread and butter. The 2018 and 2019 World Log Lift Champion had taken some time off from doing log lifts, but he has not completely abandoned this skill. Here he can be see just a few days earlier, hitting his first log lift since March. However he did not look to have missed a beat in his time away from the lift.

As of right now, given everything going on in the world, it is hard to guess when Iron Biby might compete again. However there is one thing that is known for sure: he will be coming back with a vengeance, and has the training to put up some big numbers. It never ceases to blow minds when he takes to competition, and that will surely continue soon.