How To Do Isometric Wipers (Chest)

How to do the isometric wiper 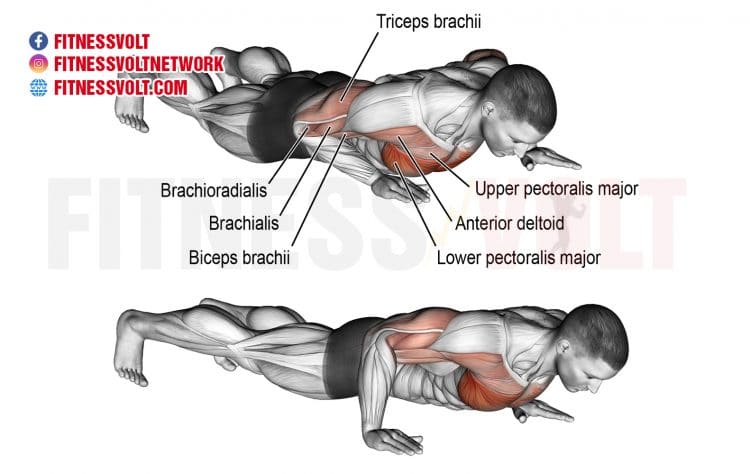 The isometric wiper isn’t your typical everyday gym exercise however it’s worth considering for the benefits it offers. This movement could be described as a plank and push-up variation hybrid working the upper body pushing muscles as well as the core.

What’s also great is that it’s a bodyweight exercise so no equipment is needed and you can make it easier or harder.

This is the target muscle group of the decline push-up and although it cannot be isolated, elevating the feet allows us to place more of an emphasis on this muscle.

The biceps brachii or biceps for short is a two-headed muscle located on the anterior or front of the upper arm. The biceps crosses the elbow and shoulder joint and therefore functions at both ends, although its primary function is at the forearm end where it supinates and flexes the elbow.

This muscle is involved in arm flexion and stabilizing the arm while the deltoid lateral abducts the arms (raises the arm away from the midline of the body).

How To Do The Isometric Wiper

There are some worthwhile benefits to isometric wipers.

Isometric wipers can help to develop your chest, triceps and front deltoid muscles. But you can also modify your body position based on your level of training and therefore increase the load and potential for gains.

Push-up variations are similar to planks in that you should maintain a strong core to stabilize your body. Try some of the variations and increase your core engagement.

Convenience sometimes means the difference between getting a productive workout and not. You have to challenge yourself for any exercise to be effective and isometric wipers are a worthwhile bodyweight movement.

While there are many benefits there seems to be one drawback in our opinion.

Sometimes body weight based exercises are more challenging and less doable than those that require using weight and machines.

This variation especially requires more upper body strength than basic push-ups (even when done on the knees). Not to mention, weak wrists and poor form can make this movement a bad choice for many.

The isometric wiper is a beneficial core and chest movement. But we also recommend switching things up and/or trying these variations and alternatives.

If you cannot do a complete push-up in the high plank position then try it on your knees. This removes a decent amount of your body weight resistance and will subsequently make the exercise more doable for those with less upper body strength or endurance.

Use push-up handles, chair handles, or anything similar to get a deeper chest stretch. This variation increases the range of motion is often the difference between feeling sore the next day which may mean you’ve activated more muscle fibers.

This is an advanced push-up variation that involves the same side-to-side movement of isometric wipers however it should be more difficult. When done properly it’s a great way to overload the chest and pushing muscles but without needing any equipment. This makes it valuable.

While we don’t know who invented this push-up variation, Jeff Cavaliere of Athlean X really made it popular and it’s really an excellent exercise.

It’s performed similarly to a regular push-up however, it involves alternating rotating the torso toward one side upon pressing up. This shifts the tension and contraction on each side of the chest individually.

How To Include Isometric Wipers In Your Workout Routine

The isometric wiper is a great chest and core exercise. However, we do not recommend it as a sole movement for working either muscle group. In other words, it makes for a useful addition to your base workout regime.

For example, if you do bodyweight-only workouts then the isometric wiper is a good way to overload the chest without equipment. But you still need heavy presses, fly variations, other bodyweight chest movements, etc.

Isometric wipers are a great core exercise but even better alongside heavy compound lifts that engage your core plus crunches, advanced planks, rotational movements, etc.

Don’t overthink it. Add three sets of isometric wipers to your workouts at the end or in between.

Isometric wipers offer many benefits. They are simple (not necessarily easy) to do, don’t require any training tools, are good for more advanced exercisers, and work several muscle groups at once.

If you haven’t already, give them a try and consider adding them to your weekly routine to scale up your training and progress.