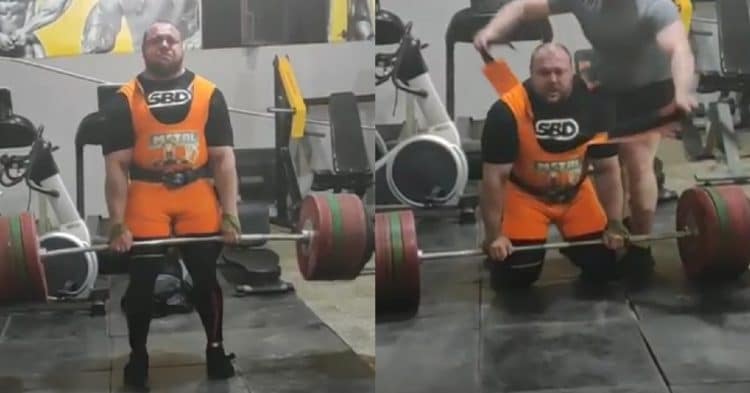 Russian strongman Ivan Makarov has his sights set on a attempting a world record in September. A recent session saw him have a near miss when be pushed his limits to the max.

Makarov has been working on making a name for himself in the strongman industry. Previously he had been known for a failed 501kg deadlift attempt a few years ago, but has been working on turning things around lately. His plan to do that is by etching his name in history with an enormous 510kg deadlift that he plans on pulling this September.

In the preparation for this massive deadlift attempt, Ivan Makarov has been hard at work in the gym. However a recent post to his Instagram shows that he may have pushed himself a little too far. It sees him pulling the first rep if a 470kg deadlift rather smoothly. However the second rep did not go as planned, resulting in him dropping the weight halfway through, and falling to his knees, nearly passing out.

“470kg for 1.5 times 😁. Preparation for the record continues, everything goes according to plan. A huge request to everyone, friends please share my video, for me it is very important, there will be support, I can do a lot.
And I also wanted to say that a lot of financial resources are spent on preparation, I have no sponsors, no financial support, so I am looking for partners for cooperation on mutually beneficial terms.”

Obviously it is never good to put yourself in a situation like this. However that does not take away from the impressive first rep that he pulled. He struggled on the second one for sure, but he was not all that far from being able to do it, too.

It will be interesting to see if Ivan Makarov will be successful in his efforts to pull 510kg in September. He told FitnessVolt that his main issue with the failed 501kg attempt revolved around finances, and he seems to be having similar issues. Hopefully he can get past whatever he is struggling with, and put on a good performance this fall.