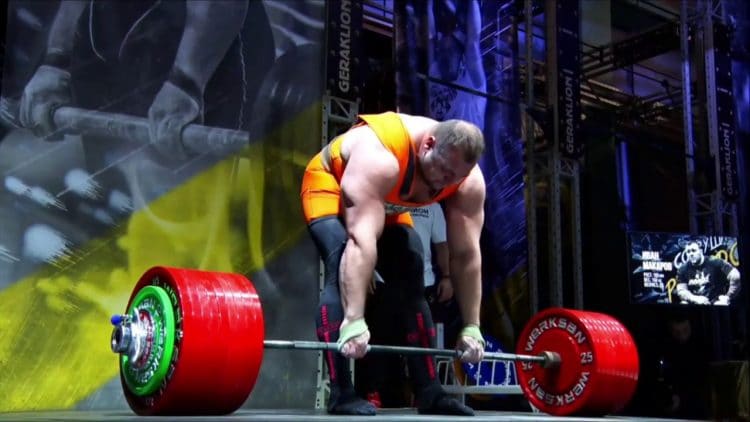 Eddie Hall’s legendary deadlift record stands to be tested another day. The latest person to try and break the nearly mythical 500kg deadlift number is Russian Strongman Ivan Makarov. Not much is known about the strong Russian, he hasn’t competed in any of the famous Strongman events (WSM, Arnold Classic, WUS Dubai..etc.) and most of his insta posts are written in Russian Cyrillic. However, after doing some light investigative journalism work I found some information on the potential future record-breaker.

Before he gained international Instagram fame for performing his insane deadlift sessions in the gym, he was an old school circus Strongman. While with the circus he was doing the usual classic circus showman acts; snapping chains, carrying people on his back…etc.

Very impressive stuff, but it was mostly local stuff. Nothing on a grander or international scale.  He even appeared in Russia’s Got Talent where he was effortlessly bending steel bars and slamming nails into boards…with his hands.

As far as Strongman competition goes, he never(as far as I can find) competed in a top tier event but he did compete this year in “Strongman champions league” event in Russia and placed 5th. This could probably mean he didn’t even start competing in Strongman until this year, but I can’t confirm this.

His Instagram fame began when he started posting his deadlift 400kg+ deadlift sessions and it all peaked when he posted a video of getting 501kg up to his knees in the gym and successfully lifting 540kg from a 12cm elevated platform- beat that, Brad Castleberry!

Not long after those posts, an announcement was made and an event was set for the record-breaking deadlift attempt. Location; Moscow, Russia, and the date was Sunday, December 1st.  Ivan used the same get-up as Eddie did when he shocked the world with his 500kg: a deadlift suit, a belt, and “figure 8” lifting straps.

He even pyramided up with almost the same weights as Eddie did. First, he did 430kg which went up fairly easy, then he went for 470kg which put up a bit of a fight and then he went for the new world record, the 501kg.  As you can see in the video, it just didn’t go his way today. He even attempted the world record the second time twenty minutes later but unsurprisingly it went even worse than the first attempt.

It’s a great time to be a Strongman fan these days. World record lifts never before attempted on earth are being tested basically on a monthly basis and we are able to witness it in real-time. Before Eddie Hall attempting and succeeding in getting the 500kg deadlift it was deemed as an impossible task. Fast forward nearly 4 years later and there have already been several attempts at an even bigger, 501kg.  With 2020 right around the corner it’s going to be an exciting year for Strongman fans, for sure.

How To Increase Your Overhead Strength

Bodybuilding vs. Powerlifting Training – Which is Right For You?