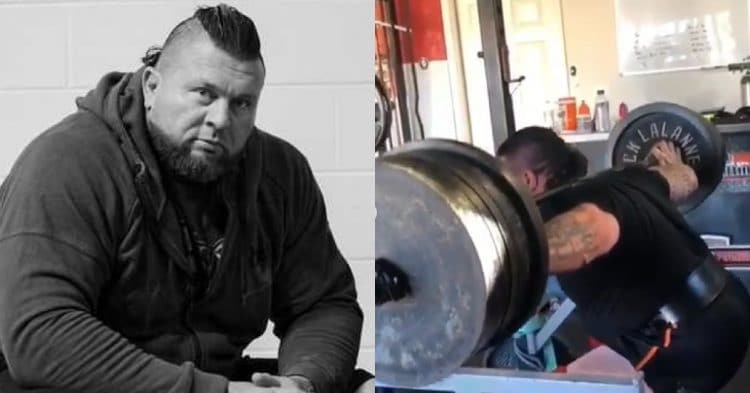 Jerry Pritchett has been doing some exceptional work lately. Even while being stuck inside, he has still been able to get some hard training sessions in, as he showed us recently.

Pritchett is a strongman veteran, having competed for more than a decade. He does not have the same type of wins as other top competitors but has been strong and consistent for thirteen years. He provides something of a standard for what it means to be an elite level strongman.

Typically, Jerry Pritchett is known for his deadlifting skills, which are about as good as it gets. However, he showed us recently, with a jaw-dropping Instagram post, that he has some pretty solid squat skills in his toolbox as well. Not only did he hit a whopping 700lb squat for a double, but he followed that up by destroying an insane ten reps of a 530lb squat.

Pritchett completely demolishes both of these lifts. He managed to get the 700lb up with no issues at all, even on the second rep. As for the set of ten, he blew through those in a way that makes you wonder if he could have done ten more reps. This was clearly an intense session, filled with some pretty awesome lifts.

This has not been the only squat training Jerry has been doing, while stuck in the house. Here he is just a few weeks earlier, hitting another gigantic squat. He does not say how much exactly he is lifting, but judging by the plates it is a huge lift.

It is good to see that Jerry Pritchett is not wasting this period of downtime by not training. It is tough for a lot of people, especially without their usual equipment. However he continues to push himself to the limit, and the results are definitely beginning to show that.

How Often Can I Do Bodyweight Training?