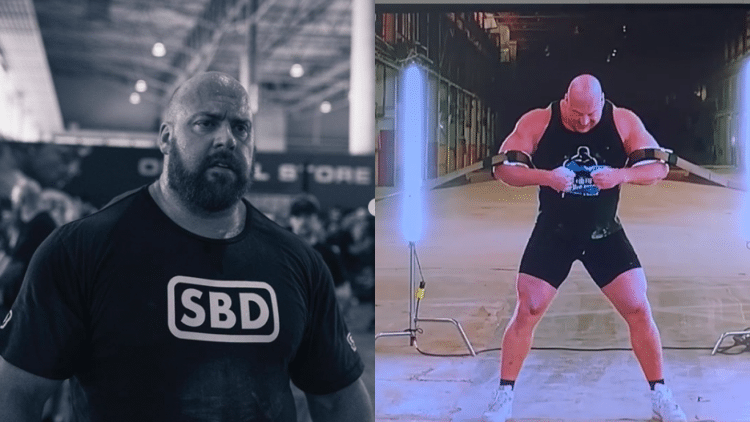 There is no doubt that JF Caron is one of the strongest men in the world. He demonstrated this with an unbelievable feat of strength recently.

Jean-Francois (JF) Caron is Canada’s Strongest Man, and has won that title an impressive seven times. In addition to that, he has also competed at the World’s Strongest Man contests, earning as high as 4th place in the 2019 event. Therefore, he is without a doubt one of the most talented strongman competitors in the world.

As a result of these impressive stats, Caron is always looking to improve his ability. He holds two world records, one for flipping a 1350lb tire four times, and another for turning a Volkswagen 13 times. The latter of these two earned him a spot in the Guinness Book of World Records.

Therefore, it was not surprising when JF Caron was asked to feature on Canadian television show Tour De Force. The show, airing on the Canal D network, featured both strongman and strongwoman athletes showing off incredible feats of strength. Among those athletes was JF, who outshone his fellow colleagues.

Caron demonstrated what he was capable of, with a clip from the show uploaded to Instagram. In the video, he somehow manages to hold two cars, while they increase in horsepower. Furthermore, in the description, he explains that he was able to withstand around 922lb in each arm, before being forced to let go.

“Here is the reproduction of Louis Cyr’s horse holding tower. I managed to hold a maximum of 922 lbs per arm still far away from the estimated 1430 lbs of horsepower.”

As Caron alludes to, he is looking to replicate strongman great Louis Cyr. At the time that Cyr did the hold, it was a bit hard to tell exactly how much he was able to hold. However, like JF states, it is estimated that he held a whopping 1430lb.

JF Caron continues to demonstrate that he is one of the most powerful strongman athletes in the world today. Moreover, despite how long he has been competing, it seems that he is still getting stronger.