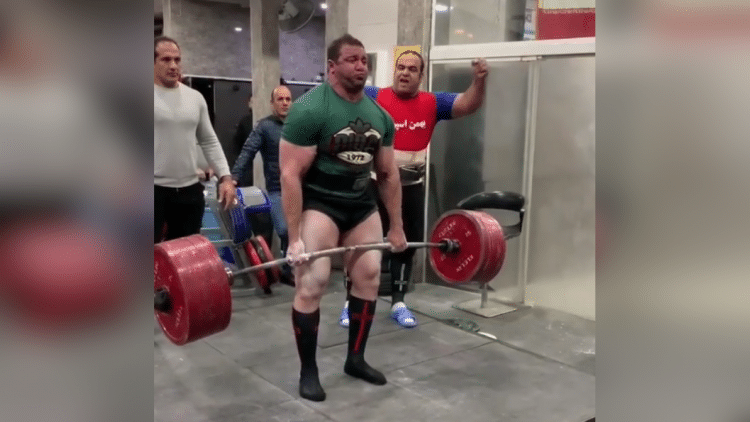 Peiman Maherpourehir is the two time Iran’s Strongest Man. However he further demonstrated his strength with an incredible deadlift recently.

Peiman is a strongman athlete, hailing from Ardabil, Iran. He won the title of Iran’s Strongest Man in both 2014, and 2015, as well as second place in 2017. Moreover, he is one of few athletes from that country to compete at the World’s Strongest Man contest. Although he was a little less than impressive, not making it to the finals in either 2017 or 2018.

Despite his lackluster performance on the big stage, Peiman is still a tremendously powerful athlete. This was further demonstrated with a recent video of him completely demolishing a huge deadlift. In the video, he gets psyched up with the help of his team, before stepping up for a 931lb (422.5kg) deadlift. What is more impressive, is that he did so without any belt or other equipment.

Following his celebration, Peiman needed some help sitting on the floor, and it is not hard to understand why. However what is a little hard to understand, is the fact that he deleted the video after posting it. Nevertheless, before that happened, it was captured by someone else, who posted it themselves.

This is quite the impressive deadlift coming from Peiman. He has been known to be able to lift quite heavy, but this is still really incredible. Despite his previous performances at the World’s Strongest Man contests, it would be interesting to see him bring strength like that to next year’s event. On the other hand, he would still have to go up against some pretty steep competition.

Whether or not he competes at the World’s Strongest Man, there is no doubt about how strong Peiman Maherpourehir is. Every time he steps into the gym, he continues to impress and improve, and it will be interesting to see his next steps of development.