Johnathan Bale Bet Almost $1 Million That He Could Do 2,400 Push-Ups In Less Than 12 Hours…And Won! 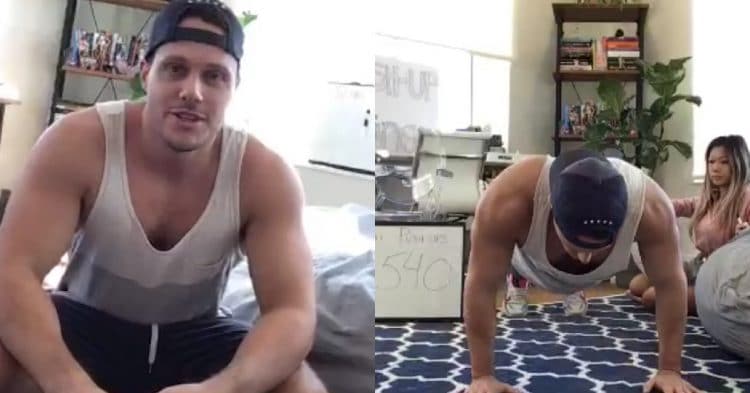 With the vast majority of sporting events canceled due to global health concerns, sports bettors are looking for new things to wager on. They found just what they were looking for, with Johnathan Bale.

Bale decided to put himself to the test in a big way recently. See, he is not just your average sports fan who is going stir crazy being stuck indoors. He is in fact the founder of FantasyLabs, a sports betting company.

That is why, when Peter Christensen bet him $2,000, to see if he could do 2,400 push-ups in twelve hours or less, Bale could not refuse. So he posted a video of a quick set of five push-ups, to make sure his form was up to standard, before getting to work on the challenge.

Following this, on April 2nd, Johnathan Bale set out to win this bet. In order to verify the accuracy of each push-up, the challenge was streamed on Twitch, live for everyone to see. So the pressure was on, to see if he could do the 2,400 push-ups in the allotted time.

As Bale got to work, more and more bets began flooding in. By the end of it all, nearly $1 million in bets would be placed, as people from around the world watched to see if he could accomplish this massive feat. Starting off with sets of 6, before slowly decreasing to 5, then 4, he was finally able to score all 2,400. With a short break after about 5 hours, it took him all of 11 hours and 5 minutes, meaning he had almost a whole hour to spare!

“This was a pretty good line,” Bales told The Action Network, after the ordeal. “I probably could’ve done a hundred or two hundred more… I was going to do higher reps, but everyone suggested not to do that. After the long break [5 hours in], I could’ve finished faster but I thought I might get injured. I was feeling like I was going to tear my bicep.”

With the bets getting as high as they did, Johnathan Bale vowed to donate a chunk of the funds to relief from the goal pandemic. This is sure to help out, as many people are struggling during these tough times.

The Best Chest Exercises You Can Do At Home

Training at home doesn’t have to mean a steady diet of pushups, pullups, planks, and burpees. While there is nothing...

This global crisis thing seriously sucks. Basically every sports league is now canceled or postponed, the coolest movies of 2020...