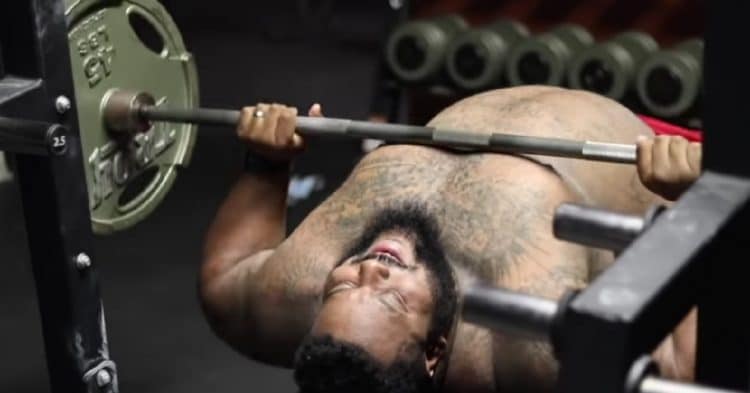 Julius Maddox has some big plans for 2020. In light of recent setbacks, he has found a way to impress in bigger ways that what you would imagine.

Maddox has his sights set on a massive goal: to become the first man to hit an 800lb raw bench press. Currently, he is expecting to go for that goal in May, but with the current global health crisis, that may not happen. Regardless, he is still working as if the contest will continue as planned.

However with the situations being how they are in the world, it has become increasingly more difficult for Maddox to keep to a typical training plan. So, as he showed in a recent YouTube video, he has been able to try some different training methods. That method includes less of the heavy lifting, and instead focusing on a ridiculous amount of reps.

With that short introduction out of the way, Julius Maddox gets to work on doing 400 reps on the bench press. At first, it was his plan to follow in the footsteps of CT Fletcher’s 225lb 400 marathon. That was what he did at first, blasting out the reps like a champ.

However, at the 200 rep mark, things started getting difficult for Maddox. He took his shirt off, deciding to lower the weight. From that point on he opted to bench press 135lb instead.

“Let me tell you what,” an exhausted Maddox said. “Doing 225 for multiple sets, multiple reps, let me tell you it has me completely, completely dismantled. Like I haven’t been this fatigued in a long time. So initially we were going to do the marathon of 225, something another guy on YouTube did. But I was trying to go along the lines of like CT Fletcher’s 400 reps in two hours…Going towards the finish line, well not even the finish line, the halfway mark, there was no way at this point that I could finish up with doing 225 for 400 reps.”

Throughout the video, Maddox does a great job explaining that he does this type of work in the gym because he finds it fun. That is pretty clear, given the fact that he always finds time to make jokes between sets. Not only that, but he actually takes the time to share a pretty emotional story about struggling to fit in while growing up.

All in all, the video is a very entertaining watch. However one can not overstate how unbelievably impressive the 400 reps were. It may not have been the heaviest weight, but it was a great way to get work in nonetheless.

How To Build A Cast-Iron Grip